Spirit Animal Round Up: Snake 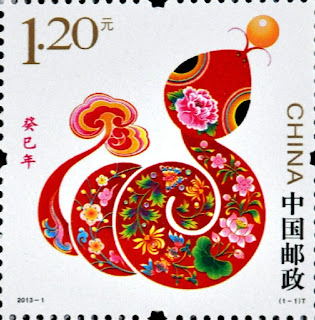 It is now the Chinese Year of the Snake! It started on February 10th, so I'm a little late to the party. Nevertheless, it's a good time to catalogue a few snaky names for the year to come.

Like the owl, the snake is another animal that is highly respected by Neo-Pagans but distrusted and feared in many other cultures. The most obvious example is in Judeo-Christian mythology due to the association with Adam and Eve and the fall of man. Snakes are often equated with Satan because of this story. However, the snake has a long connection with creation, fertility, feminine energy, and wisdom. Depictions of the Great Goddess often have a snake as her familiar. Snakes can symbolize the umbilical cord tying us to the Great Mother and they are worshipped as guardians of birth.

For this list, I tried to stay away from vicious sounding names like Viper, Venom, and Cobra, if that's alright with everyone. There are still plenty to choose from:

1. Serpentine. A word used to mean anything from "snake-like," "winding," or "devious." This is also the name of a gemstone.

2. Asp. A specific species of snake common in the Nile region, asps were a symbol of royalty in Ancient Egypt. Famous for being Cleopatra's suicide method.

3. Egle. In a Lithuanian fairy tale, Egle is a maiden who marries a sea snake. Her name means "fir tree."

4. Veles. From Scandinavian mythology, Veles is the god of the Underworld who takes on the form of either a snake or a dragon depending on which stories you read.

5. Apophis. "To slither" in Greek. It comes from the Ancient Egyptian Apep, a snake god representing chaos.

6. Ouroboros. The name of the iconic "snake eating it's own tail" symbol, representing the idea of eternity.

7. Naga. There are lots of snakes in Hindu mythology and Naga is Sanskrit for "serpent," think Nagini. Oddly, Naga could also mean "elephant." There's also Nagendra, meaning "lord of snakes."

8. Adder. We have Adam and Asher, why not Adder?

10. Tanith. The Phoenician goddess of the moon, the stars, love, and fertility. Her name means "serpent lady."

11. Rainbow. Many people in Australia and Africa have myths about a Rainbow Snake. This being is either believed to be Mother Earth or a water god.

12. Ophion. In Greek mythology, a snake named Ophion incubated the primordial egg from which all things were born.

13. Eobshin. The Korean snake goddess of wealth. Wealth was tied to crops and snakes ate the mice and rats that destroyed them, so the connection makes sense.

So how about you? Have you ever seen any snake inspired names?