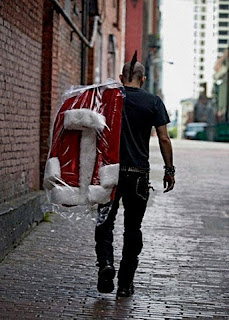 For a good, strong man's name associated with Yuletide, you could always go with the name of the awesome Norse god Odin.

Odin (pronounced "OH-deen") is one powerful dude who's folklore is incredibly lengthy and complex. He ruled over Asgard, one of the nine worlds and the capital city of the Norse deities. He is the god of magic, prophecy, poetry, hunting, wisdom, war, death, and victory. Worship of Odin dates all the way back to Proto-Germanic times. Odin has lots of cool toys and pets, a eight-legged horse named Sleipnir, a spear named Gungir, two ravens, a magical gold ring called Draupnir, and a pair of wolves named Geri and Freki. He's also a shape shifter, and can travel the world in disguise. He is the subject of many ancient poems and stories, and gives the mead of inspiration (made by dwarves) to worthy poets. Odin is also associated with trickery and deception, using his cunning to swindle the blood of Kvasir from the dwarves.

So what, precisely, does any of this have to do with the holiday season? What if I told you that Odin is Santa Claus?

Well, yes. They're both Santa Claus.

The Christian Saint Nicholas was a Greek Bishop living in Myra (part of modern-day Turkey). He had a reputation for giving gifts to those who had nothing. He especially loved children, and is the patron saint of children among other things. In the most famous story, Saint Nicholas gives money to a poor man in order to save the man's daughters from a life of prostitution. My aunt married and had children with a Dutch man, and when I go to their house on Christmas they have pictures of their Santa Claus, who still looks like a bishop.

Christianization of Scandinavia was slow, where they celebrated the pagan winter solstice holiday of Yule. In countries like Germany, the Netherlands, and Belgium, Yule involved Odin. After all, Odin lead a hunting party through the sky during the solstice. Children would leave boots filled with carrots, straw, or sugar near the chimney for Odin's horse Sleipnir. When they woke up the next day, they found that Odin returned their kindness by leaving gifts in the shoes.

The combination of Saint Nicholas and Odin was easy. They both had long, white beards, and they're both known for giving gifts. And so the tradition survived despite Christianization. Today there is some variation of the old boot tradition in many cultures. Mexican children leave their shoes outside their door or by the window on The Day of the Kings. Americans leave stockings by the chimney instead of boots.

Odin still remains important to Neo-Pagans. He is particularly important to the Asatru movement in Iceland and the Asatru Folk Assembly in the United States. The Asatru strive to emulate the religious practices of the Norse before Christianization, relying on historical texts and ancient poems to do so.

Some Neo-Pagans believe that children shouldn't be named after gods, but that hasn't stopped some people. As a given name, Odin is enjoying some mild popularity. The name first appeared in the top 1000 baby names in 2008. So far, it peaked in 2009 at #981.

So if you're looking for a strong, masculine name with a tons of history for a boy born during the Yule season, consider Odin. As the song from Emerald Rose says, "Santa Claus is Pagan, Too!"