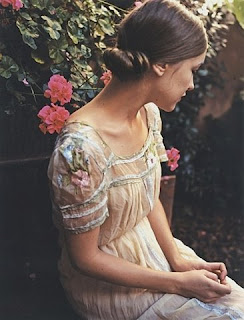 Had I known that there would be a party, I would have saved Elphaba and Glinda for it. But it's the perfect time to discuss Nessarose (pronounced "NEH-sah-rohz").

What is there to say about Nessarose? In the original L.Frank Baum books and the movie, she's just a pair of shriveled feet under a house. It wasn't until Gregory Maguire's novel Wicked that she was given a history, a personality, and a name.

If you've seen the musical adaptation, you know that Nessarose Thropp is Elphaba's younger sister. Elphaba loves her and takes care of her, but Nessarose finds her green-skin sister embarrassing. On the stage, she is depicted as being wheelchair bound. In the novel, the nature of her disability may be more upsetting for those that don't spend time researching side shows. She has no arms. Nessarose is also her father's obvious favorite, which becomes a point of contention between the two sisters.

In the musical, Nessarose is a sympathetic character. She wants to have friends and be like everyone else, but that's hard to do when you have a weird sister that no one likes. In the book, Nessarose is extremely religious to the point of being obnoxious. Eventually, Nessarose becomes the ruler of Munchkinland while Elphaba is missing and presumed dead. She is not a very nice leader. She uses sorcery to keep people in line. Due to her cruelty, her subjects call her the Wicked Witch of the East. She, of course, meets her demise when Dorothy's house falls on top of her.

Nessarose might be the most usable out of all the Wicked names. Although it's not a well known name yet, Elphaba was invented solely for the character. Glinda is a "real" name, but it is so attached to pinkness and bubbles. Nessarose, however, is a secondary character with a combination of existing names. The meaning of Rose is obvious. Nessa's a little trickier. It's a variant of both Agnes and Anastasia, and a nickname for Vanessa. On it's own, it could come from the Cornish word for "second," or the Hebrew word for "miracle."

Nessarose is an interesting character. She does a lot of villainous things, but no one ever talks about her as a villain. She has a lovely name, though. So Nessarose could be the witchy, nerdtastic name for you.