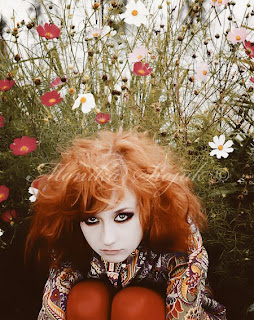 This post is inspired by a friend of my mother. She had her name legally changed to Triskele when she became an American citizen (she's from Poland originally). I've never heard it used as a name before, but had the vague idea that it was the name of a symbol that involved the number three. When I looked into it and first saw the actual symbol, I thought, "Hey, I saw that at Newgrange!"

The triskele (pronounced "TRYS-kee-ul" or "TRI-skee-ul", but the person I know pronounces it "TRYS-kul") is a symbol that looks like three interlocking spirals. It was carved into a number of ancient Irish buildings, including the rocks of Newgrange. Newgrange is believed to be a prehistoric tomb, although this claim is debatable. It was built sometime between 3100 and 2900 BC. Many historians believe that the building must have had some religious significance. When I visited Newgrange last summer, they showed us that the building is aligned so that the rising sun pours in through an opening above the entrance during the winter solstice.

This symbol appears in other countries besides Ireland. The triskele appears throughout much of Western Europe, where the Celts are from. In Brittany (Northern France), the triskele is used as their regional symbol and is placed on many tourism and fashion items.

A similar symbol called the triskelion appears in ancient Greek, Sicilian, Spanish, and Manx art. Both triskele and triskelion are Greek for "three-legged", which should give you a hint as to what a triskelion looks like. It's a bizarre image of three legs bent at the knee and joined together at the hip. It's found on ancient coins, pottery, and is an emblem on the flags of Sicily and the Ilse of Man. 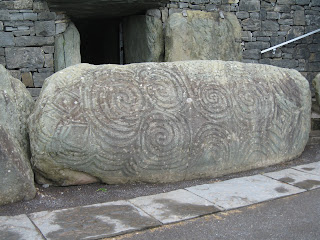 No one knows what the triskele meant to the ancient Pagans. In modern times it has been used to stand for a number of different things. This symbol is important to many Neo-Pagans that focus on Celtic traditions, like Celtic Reconstructist Paganism. In CRP the symbol stands for the "three realms": land, sea, and sky. It is often used to symbolize the Irish god of the sea Manannan mac Lir (probably because it kind of looks like waves, but I think it looks like a thumbprint, personally), but is sometimes used for the goddess Brigid. Wiccans sometimes interpret the symbol as the three stages of the Goddess (Maiden, Mother, and Crone). Christians have used it to represent the Holy Trinity, and it appears in many illuminated manuscripts. It has a less honorable connection as well: a variation of a triskele (three interlocking sevens) was invented by the Nazis.

As I said before, I've only ever heard of this name on my mom's friend. I have no idea what her original name was or why she was so attracted to Triskele. No baby name resource I could find lists it. A quick google search came up with at least one Neo-Pagan that goes by Triskele, but that's it. My spellchecker doesn't even know what to make of it. But I think it's an awesome name for anyone, even with the tricky pronunciation. The familiar "Trish" and "Kelly" could be reasonable nicknames. For those unfamiliar with the names origin, it might not even register as a "witchy" name. Just a highly unusual one. Trinity's an accepted name, so why not Triskele?

Image Credit:
http://monislawa.deviantart.com/art/Flower-Power-105768680?q=gallery%3Amonislawa%2F502214&qo=8
The photo of triskeles on Newgrange is my personal photo.
Posted by Isadora Vega at 5:27 PM