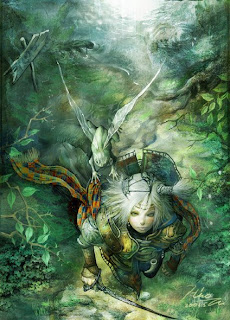 Today is Yule! So what better name to profile than Yule!

I've talked a lot about this holiday in prior posts and today I'm going to talk about it even more! Yule (all my sources say it's pronounced "EWE-elle," but I've only ever heard "YOOWL") was a holiday that was celebrated primarily by Germanic and Scandinavian Pagans. It occurs during the winter solstice which is the shortest day of the year. Which means that only Neo-Pagans in the Northern hemisphere are celebrating it today. Those in, say, Australia, will be celebrating Midsummer right about now. Happy Litha, guys!

Wiccans believe that the Goddess gives birth to the God every Yule. When this happens, the days grow longer as the God grows older. All Wiccan holidays have to do with God and the position of the sun.

In the olden days the Yule celebrations would have lasted until early January. Many winter traditions started with the Pagans. The Yule log is one of the biggest. There is some debate among historians whether the Yule log had any religious significance for ancient Pagans, but it is still the highlight of the celebrations for many modern day Pagans. The Yule log is either given as a gift or harvested from the forest, then decorated with seasonal greenery, doused with cider and flour, then lit by the remnants of last years Yule log. Yule is sometimes used as a surname (in fact, it's probably a more common surname than a given name). This would have been an occupational marker for someone who's job it was to keep the Yule log burning during the celebrations.

Wiccans still like to bring in seasonal botanical decorations (well, not me, since I'm allergic to them) into the house in order to invite nature sprites into the celebrations. If you hate being caught under the mistletoe, you have Pagans to blame for that too. They associated the plant with romance, fertility, and virility. Wiccans also enjoy "wassailing" the trees and crops by pouring wassail on the ground. Wassail is not unlike fruit punch. Oranges are a traditional Christmas present, throughout my Grandfather's childhood that's the only Christmas present he got. Wiccans also use gifts of oranges to signify the sun. 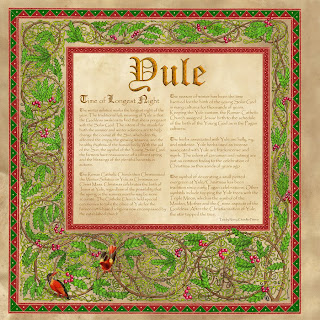 In 46 BC Julius Ceasar created the Julian Calender, which would later turn into the Christian Calender. In it, he established that the Winter Solstice would be celebrated on December 25th all throughout his conquered territories. And that's where we get to why this is "Wicca-lite." The reason this name is Wicca-lite is because the term Yule is still used interchangeably with Christmas despite the fact that Wicca is the fastest growing religion in America and people should really know better. The name has been appearing in a lot of Christmas baby name lists on other websites. Variations in spelling include Yul, Yool, Yoole, Euell, and Ewell. As a boys name it is really not very common, it has never appeared in the American top 1000 baby names and the only namesake I can think of is classic film actor Yul Brynner. However, it won't stand out as much as a Pagan name as much as, say, Ostara and Mabon would.

But to me, Yule is obviously Pagan. And a wonderful thing that is. Blessed Yule, everybody!