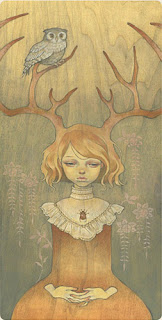 Holly (pronounced "HALL-ee") is an evergreen bush that's been used as a decoration during the winter solstice by the Druids, and they were also sacred to the Romans who associated the plant with Saturn. It is the plant of death and rebirth. Their winter berries are an extremely important food source for many species of birds. The word is derived of the Old English "holegn" meaning "to prick," which is telling. Their leaves are very spiky and birds like to hide in their branches in order to be protected by predators. Today, many species of holly are becoming rare or even extinct.

Holly has been used for many other things besides decorating. It's wood is ivory white with no grain, which makes it perfect for white chess pieces. Some species are used to make herbal tea. A bag of holly leaves or berries carried by a man is said to increase his ability to attract women. Holly is used in spells that have to to with sleep, rest, or death, and is sometimes used to make wands.

Yuletide is not the only time of year that Neo-Pagans associate with this plant. It is sacred during the Summer Solstice as well. The Celtic Tree Month of Holly occurs from July 8th to August 4th, and it's Celtic name is Tinne (pronounced "CHIN-uh," I think). The month of holly is a good time to perform magick to bring about a successful harvest. Holly water is made by soaking the plant overnight under a full moon, this is then sprinkled over infants to keep them happy and safe. Keeping a holly tree in the garden will protect the house from unfriendly spirits. Make sure the branches are truly dead before burning them, as burning branches that are still alive is considered unlucky. Holly intertwined with ivy are made into crowns traditionally worn for handfastings.

There are other gods that are associated with holly besides Saturn. During the Yuletide season many Wiccans believe in, tell the story, and act out plays of the battle between the Holly King and the Oak King. This story is celebrated in most Celtic based traditions of Neo-Paganism. The Holly King kind of looks like a woodsy Santa Claus; he's a bearded old man that wears red and a crown of holly. During the winter solstice, the younger, virile Oak King slays the Holly King, and rules until Litha, or Midsummer. On Midsummer, the Holly King comes back and slays the Oak King. He rules until Yule when the whole cycle begins again.

Some practitioners believe that both kings are two aspects of the Horned God. Sometimes he's just called God, or The Lord, or a wide range of other options. But a lot of Pagans picture him as a man with antlers or rams horns, which is why he's called the Horned God. The Goddess gives birth to the Horned God every Yule. The God grows older as the days grow longer, until he reaches the peak of his life at Litha. He then ages until he dies at Samhain. Then the cycle continues on Yule again. The young god (Oak King) and the old god (Holly King) cannot live at the same time, and yet one cannot exist without the other.

Despite the name's masculine traditional associations, Holly as a given name has never been a boys name as far as I can tell. Holly is a girls name that is extremely popular in pretty much every English-speaking country. It's currently at #20 in Scotland and New Zealand, #27 in Australia, #30 in England, #33 in Ireland, and #122 in British Columbia. In America, the name reached it's peak in the 1970's at #53. In 2009 it ranked #380. Holly has tons of namesakes and a fictional Wiccan from the television series True Blood is one of them.

Holly shows up on a lot of Christmas baby name lists, too. It is a lovely winter name no matter what you celebrate. It has been so integrated into Western culture and yet the layman won't know about it's Pagan associations, which makes it Wicca-lite.

Image Credit:
http://www.audrey-kawasaki.com/
Posted by Isadora Vega at 11:00 AM