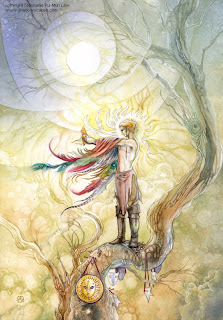 If you're a Sagittarius, you could go by gemstone name Topaz. The month of Sagittarius is upon us right now, it starts on November 22 and ends December 21. But before we get to that, lets talk about birthstones in general.

Using a stone associated with a zodiac sign might be better than using a birthstone. As it turns out, different cultures have different birthstones, so there's a lot of disagreement. When looking for the gemstone for December I found that different sources listed different stones: blue topaz, turquoise, ruby, onyx, and zircon. In 1912, Jewelers of America made a list of the "modern" birthstones in order to standardize what everyone would offer in stores. So the birthstone list of today is basically a ploy to get you to buy things. Which is why I'm going with the less disputed Greek zodiac stones.

The etymology of the word topaz (pronounced "TOH-paz") is a little bit of a mystery. There are some who say that the word comes from the Greek "topazion" meaning "to seek." Others say it's related to the Sanskrit word "tapas" meaning "fire."

In nature, topaz is a clear, colorless crystal unless it's tainted by impurities. The impurities is what gives the topaz it's hue. It's most commonly associated with yellow, but it also comes in blue, red, gray, and brown. In the Middle Ages, the word topaz was used to describe any yellow gem, but now the term is specific to a stone of a certain chemical make-up which I'm to uneducated to understand and reiterate here.

Many Neo-Pagans believe in gemstones abilities to heal, and according to tradition topaz has many medicinal and psychic properties. Yellow is a color associated with the wind element, which is in charge of communication. Because of this topaz is believed to heighten intellect and creativity. Pagans will use it in rituals in order to repair tissue damage and prevent colds. Because of it's association with the sun, topaz is believe to ease depression and anxiety.

This is a gem name that isn't really established as a given name the same way that Jasper and Jade are. But it's recently been done, mostly in naming little girls (why is it more socially acceptable for a girl to have a creative name than a boy?). I've seen this name periodically as a magickal name, but the most well-known witch named Topaz is a fictional one. In the Marvel comic book series "Witches," Topaz grew up as an orphan in India and was gifted with magical abilities as a little girl. She is adopted and trained by a sorcerer named Taboo, and has an on-and-off romantic relationship with Wolf by Night (guess what he is). She gets kidnapped by a demon named Mephisto who tells her that by her 21st birthday she'll be powerful enough to destroy him. She's held prisoner for a time until she is rescued by Doctor Strange. Afterwards, she becomes Doctor Strange's apprentice. If you're planning of using this name and are nervous of this association, I doubt that many people are familiar with it.

So if you're looking for a name for the Sagittarius in your life, Topaz is truly unique. I just wish I knew about the preventing colds part before I got one.