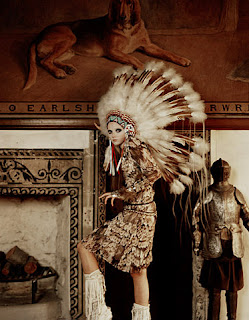 Here's a spring name from the Native American people: Onatah.

Onatah (pronounced "oh-nah-TAH") is the Iroquois goddess of corn. She is the beloved daughter of Eithinoha, or Mother Earth. Her name actually means "Earth's daughter" or "of the earth." The Iroquois people are originally from what is now New York state. Along with beans and squash, corn was a major staple of their diet.

The story of Onatah is an interesting one. One day, Onatah was kidnapped by the Lord of the Underworld. Her mother became frantic, searching all over for her. But she couldn't find her. She had no help, because the sun god was hibernating for the winter. While Onatah was missing, the crops failed to grow. When the sun god finally woke up, he joined the search and figured out where she was. He heated the ground until it split open, and Onatah was able to escape. With Onatah back, the earth flourished again.

But the spirits of the Underworld missed Onatah, and when the sun god fell asleep again, they recaptured her. And so the story continues every year, over and over again. When Onatah is in the Underworld, nothing can grow. Spring will only come when she is rescued again.

Oh, I'm sorry. Does this story sound a tad familiar? Reminiscent of a myth regarding a certain bride of Hades? Well, yes, it does sound remarkably like the story of Persephone and Hades. It stands to reason that every culture that lived in an area with four seasons probably has a story like this. Onatah's is simply a variation of a theme.

So if you would like a name that honors Native American culture, Onatah is an interesting choice. I can't think of any other names that it sounds like. It's truly rare. And a neat choice for a spring baby.