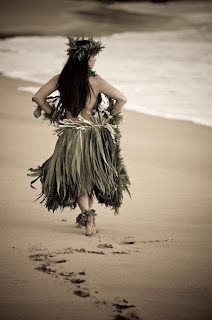 This website is pathetically low on Hawaiian names, but Hawaii is a part of America so it's the perfect time to profile the name of it's most famous goddess.

Pele (pronounced "PEY-ley") is the Hawaiian goddess of volcanoes, lightning, wind, fire, and dancing. The name's meaning is unknown. It is believed that she lives in the Halema'uma'u Crater at the summit of Kilauea, one of the earth's most active volcanoes. But she still manages to control all volcanic activity on the big island of Hawaii.

There are many reported sightings of her around the volcano. She may appear to people as a beautiful young woman, as a crone accompanied by her white dog, or as a being made from fire. Her personality is much like the volcanoes she presides over: unpredictable, inpulsive, and quick to anger. Despite this, the Hawaiians regard Tutu ("Grandma") Pele not with fear but with great respect. When lava destroyed part of the village of Kalapana in 1986 a resident said," I love my home; lived here all my life, and my family for generations. But if Tutu takes it, it's her land." There are no shrines for Pele as they are easily destroyed by lava.

There are many different legends regarding how Pele first came to Hawaii. It is believed that she came from Tahiti, much like the natives of the Hawaii. Some say that she was exhiled for her temper and ambition, or for seducing her brother-in-law. The wife of this brother-in-law was Na-maka-o-Kaha'i, goddess of water. There are many instances in which this elder sister tried to kill Pele. Every incident of volcanic activity in Hawaii is believed to be Pele's way of expressing her longing for her true love. However, she is fickle and has a tendency to kill her husbands. The Pagan religion was officially banned from Hawaii in 1819, but that did absolutely nothing to destroy worship of Pele. No matter how superior the missionaries felt their faith was, the native's love of their goddess was simply too great.

However, if you're from other parts of the world, Pele might scream "soccer" instead. Pele (pronounced "pey-LEY" in this case, I think) is the nickname of Edson Arantes do Nascimento, a legendary soccer player from Brazil. Some regard him as the best soccer (football to everyone else in the world) players of all time and is a national hero for his home country. So there are certainly those that would be more inclined to think of Pele as a boy's name instead of a girl's name. He got his nickname as a child when he mispronounced the name of his favorite soccer player, Bile.

Despite the wonderful stories and the lovely sound, I'm not surprised that the name Pele isn't used all that much. Pele is a creater/destroyer goddess. That means that she represents drastic change. She's very unpredictable. Even Neo-Pagans tend to be very wary around this type of energy. So I don't think Pele will be given to that many children. Then again, lots of people use Kali, so who knows.

Pele is an exotic and daring goddess name that is not used very much at all. On the right person it could be fantastic.