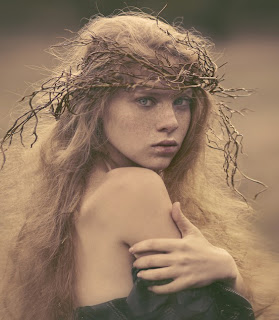 Continuing on with our strange and unique American theme week, this next profile is inspired by an author.

Flannery (pronounced "FLAH-neh-ree") is an Gaelic unisex surname that originally appeared in documentation as O Flannabhra. It's derived from the words flann, "red," and abhar, "eyebrow." This is why the meaning is often listed as "russet hair." Variations include O'Flannery, Flanary, and Flannary. Flannery is one of the few names to have a motto along with their family crest. It reads: "May the tree flourish in heaven," which most likely started off as a slogan or war cry.

There are plenty of namesakes with Flannery as a surname, but there is only one famous bearer who used it as a first name. Mary "Flannery" O'Conner was an American writer well known for her grotesque themes. Her two novels and many short stories and essays had flawed human characters and often dealt with morality. She was born and raised in Savannah, Georgia, which might have influenced her macabre writing (Savannah is believed to be the most haunted city in America). She was very smart and had a sardonic sense of humor.

I'm actually shocked that Flannery isn't more popular. It is so perfectly in trend. It's an Irish surname (like Donovan and Sullivan) that has an "ee" sound at the end (like Avery and Hailey). People should be clamoring over it. Because of the author, many Americans might associate it with the South. But it suits both genders equally.

I think I would have to pick up some of O'Connor's writing before I include it into my favorites. I think you should always research the most famous namesake. But Flannery is a wonderful name. It's unique for the time being, but it fits in marvelously with today's popular names.

Tomorrow, I fly away. So starting tomorrow, the scheduled posts are supposed to come out. Let's hope this works! And I will return with many name goodies from Spain!