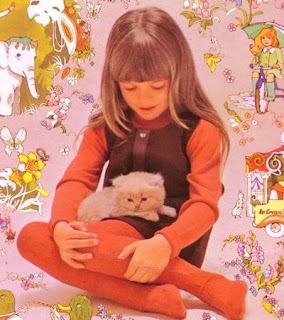 Here's a name I've loved ever since childhood that is just perfectly witchy. Faline (pronounced "fay-LEEN") is Latin for "cat-like." And cats and witches go together like milk and cookies.

Domestic cats have been respected and feared in many different cultures:

-A Neolithic grave discovered in 2004 contained the skeletons of an African wildcat and a human together.
-The Ancient Egyptians are credited for first domesticating the cat. The Egyptian goddess Bastet is depicting as having the head of a house cat or a lioness.
-In Greek and Roman mythology, cats are associated with Artemis and Diana.
-The Norse goddess Freyja rides a chariot drawn by cats.
-The first woman of the bible, Eve, was associated with felines in early Christian culture.
-During the Middle Ages, Pope Gregory IX declared that cats were diabolical, and they were routinely killed.
-In Japan, the Maneki Neko (the waving cat statue) is a symbol of luck.
-In the Islamic religion, Muhammad had a favorite cat named Muezza.

Cats are considered to be the most traditional familiars (a familiar being a magickal animal companion), particularly black cats. From what I understand, it's true that cats were killed in the Middle Ages due to their association with witches. However, the addition of a specifically black cat in a witch's coterie is relatively new. It wasn't until the 1800's that black cats took the lead role that it once shared by rabbits, rats, moles, and snails. This was influenced by the birth of showing, breeding, and pampering of domestic cats. People started to pay attention to different breeds and appreciating the different looks and personalities. Before this, they were just seen as a means to exterminate mice. The cat's many amazing abilities helped cement this connection to witches in the public mind: they like to be out at night, they materialize seemingly from nowhere, they sense storms and earthquakes before they happen, etc.

So a Neo-Pagan would think that being "cat-like" is an enduring trait. But does this name seem a little familiar? A little reminiscent of some other animal? Like, say...a deer?

Perhaps I should come clean about where I first heard this name. Fans of classic Disney films will know that Faline is Bambi's love interest, the doe that Bambi becomes twitterpatted over. If you're now depressed, thinking that whoever has this name will encounter a lot of teasing, I'm here to tell you that it probably won't happen. The reason for this is also depressing. I don't think many kids these days pay attention to the old movies. Maybe someone who has kids or works with kids or a regular basis can chime in and see if this namesake is too much, but I don't think many people are familiar with the character anymore.

Faline is a rare name that has never been popular in the United States. I don't really see this name on a pet. That would be kind of like naming your child Human. If I was pregnant, I would definitely consider this name for my daughter. Faline is very gentle and sweet on a child, but also sounds sexy on a woman. It has simple, familiar nicknames that are also tinged with magic: Fae, Faye, or Fay. I mean, I don't have to tell her that I first heard it on a cartoon deer, right?

Image Credit:
Founde via http://ffffound.com
Posted by Isadora Vega at 12:32 AM