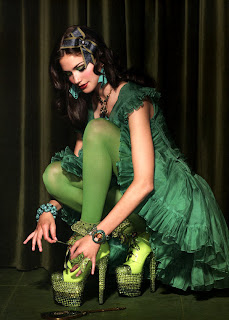 People who actually know me are probably thinking, "How was this not your very first profile on this site?" I restrained myself! But my geekiness could not be held back any longer.

Some Neo-Pagans will say that these fantasy witches have nothing to do with us or what we believe in, but they kind of do. When a witch becomes a popular icon, we take notice. Our entire public relations with other people is based on the actions of fictional characters. So when the character is unsavory, or is just poorly done, it's a sore point. No amount of great writing could make me get through The Witches of Eastwick because of it. And I know that I will never in my life touch Rosemary's Baby. However, when someone makes the witch a hero, or creates a thought provoking one, or just gets it right, we're fans. That's why my Wiccan calendar points out the day Harry Potter and the Sorcerer's Stone was published, the birthday of Wiccan novelist Starhawk, and the birthday of the actress who played the Witch that would be Elphaba.

In the 1939 film version of The Wizard of Oz, the character of the Wicked Witch of the West is played by Margaret Hamilton. Her previous profession endlessly fascinates me. She worked as a kindergarten teacher. I would have loved to sit in on one of those classes. Anyways, the Wicked Witch is her most famous role. It appears on lists for Best Film Characters and Best Film Villains consistently. During her lifetime, she constantly worried that her performance was too scary for children. But she continued working and had a good sense of humor about her legacy. In a different film, she constantly carries a broom as a joke.

Now, in adapting the classic children's novel by L. Frank Baum, the film makers made a few changes to the Witch. They switched the Witch's method of transportation from magical umbrella to a broom, which is an instantly recognizable witch symbol. They also made the crushed Witch of the East her sister, which makes her hatred of Dorothy understandable. But the most interesting change is kind of a big one. In the book, the Witch was not green.

I wish I knew why they made that decision. I suppose the Witch has green skin for the same reason that there are ruby slippers instead of silver ones, they wanted to show off the new color film technology. But whatever the reason, it was a brilliant choice. The image stuck. And when Gregory Maguire wrote his novel Wicked: The Life and Times of the Wicked Witch of the West, he expanded on this character. He made her green skin a big part of the forming of her personality. He also gave her a name: Elphaba. Elphaba comes from a phonic pronunciation of L. Frank Baum's initials: L. F. B.

Without giving away any spoilers to those who haven't read it, here is what the Wicked Witch is like in the novel. Elphaba Thropp comes from Munchkinland, and is born with green skin. We don't really know what caused it even though there are several theories presented. She also has a bizarre allergy to water. She never allows herself to cry and only baths herself with oil because of this. Her green skin immediately makes her an outcast no matter where she goes. While in university, many people avoid her because she's perceived as odd and ugly. She wears a lot of black because everything else clashes with her skin tone. She has power that she can't control very well that mostly manifests itself when she's angry. Even though she's clearly upset that her sister is "the favorite," she dutifully cares for her anyways. As a young woman, she's a radical revolutionary. Despite being the daughter of a priest, she's an atheist. She's also a strong supporter of Animal rights (Animals are capable of human thought and speech in Oz). As she grows older, she becomes increasingly disillusioned and bitter. As a result, she does some pretty nasty things.

The way her unusual name is explained in the book is interesting. Elphaba's father is a Priest, he is a very religious man. So his daughter is named after a fabled Saint Aelphaba who disappeared behind a waterfall and reappeared a hundred years later before disappearing behind the waterfall again. This fable connects with the bucket of water that Dorothy splashes on Elphaba, supposedly killing her. Fans of the Wicked series have debated that this means that Elphaba is going to be resurrected in the fourth and last book. Maguire once stated very cryptically, "A witch may die, but she will always come back--always."

Wicked was made into a Broadway musical, and they kept the character mostly the same. What changed the most was the story. The novel is really great at presenting questions about the intricacies of evil and how people become evil in the public mind. There's actually a lot of heavy stuff in it. In contrast, the musical has a very simple message about friendship and learning from people who are different. A lot of adults enjoy the play, but it's made for kids really. Because Elphaba in the musical never really does anything bad, it doesn't have the same darkness that the book does. Not that that's a bad thing. It's fantastic that kids look up to Elphaba!

My love for this name and character is so strong that I was getting really defensive on some other name websites. "I could totally use it for my daughter! The character isn't that well known." But, as much as it breaks my heart, it does have the same challenges as Nymphadora and Rapunzel. A possible upcoming film adaptation of the musical will only intensify the matter. On the other hand, children are given geeky names all the time. I've heard of so many parents that named their sons Ka-lel that it no longer seems odd to me. Aelphaba might be a sneakier way to use this name. And the argument of "Would your really name your daughter after a witch?" doesn't mean anything to us because...well...what do they think we are? But if you're going to give your kid a geeky name, you better hope that she shares your love.