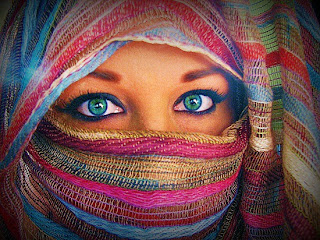 I see this name mentioned a lot in baby name resources, but I've never seen anyone actually use it.

Kismet (pronounced "KIZ-met" in English, it's probably different in it's language of origin) is often listed as an Arabic name meaning "fate." It ultimately derives from a Turkish word qismet (which does mean "fate" or "portion"), which comes from the Arabic root word qasama meaning "he divided." Kismet apparently used as a title to a novel made in 1877, which is when English speakers began using the word. It is not used as a given name in any Arabic country and is instead only used as a vocabulary word.

Neo-Pagans deal with the idea of fate in different ways. Some believe in it, others do not. What I do know for certain is that there is no such idea as "God's plan" in any Neo-Pagan faith. Usually when we talk about fate we talk about the fate we make for ourselves. There are also The Fates of Greek mythology, which isn't what Kismet is referring too.

Theater fans might already be familiar with this name. Kismet is the name of a classic Broadway musical that isn't performed much anymore. Seriously, I couldn't tell you one song from it. I've heard that this is because it was tailored specifically for Alfred Drake who was a major stage star at the time. Supposedly his performance was phenomenal. He did receive a Tony award for it. It came out in 1953 which was before my parent's time so I wouldn't know. Perhaps people feel that no one could match what Drake did. The story is pretty standard Broadway musical comedy fare: there's a wily poet that gets in and out of trouble and a love story between a princess and a Calif. It's set in some romanticised Arabic place. Kismet was adopted from the play of the same name and was made into a movie. Aside from that, Kismet is also the name of a super-heroine from Marvel comics.

Kismet has never been a popular name in the United States. The name does sound a lot like "kiss," which might have some people running. Perhaps they think that the fodder for boyhood teasing is just too obvious. But you all know that I think that avoiding names due to teasing is silly. It is almost always listed as a girls name, but I see no logical reason why it can't be used for boys. Variant forms are Kismat and Qismat.

I love Kismet as a middle name. I don't know if I would use it as a first name personally. But it's been one of my favorites since I was a child. I would love to see it used more.

Image Credit:
Found via http://pinterest.com
Posted by Isadora Vega at 10:26 AM