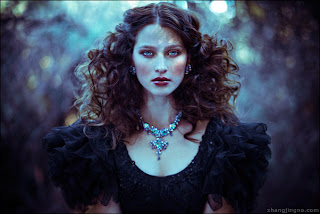 Belladonna is a plant that has a witchy reputation. For you see, this plant is also known as deadly nightshade.

This plant plays a very important part in the film Practical Magic. Witchy sister Gillian laces her boyfriend's drinks with belladonna just so she could get some rest. Later in the story, her sister Sally accidentally kills him by giving him too much. Turns out there is truth to this story.

Belladonna (pronounced "bel-ah-DON-ah") is an Italian name meaning "beautiful woman." This name was given to the plant due to it's historical use by women as a cosmetic. Dilated pupils were considered very attractive in the 1500s, so woman would use eye drops made from belladonna in order to achieve this look. Unfortunately, prolonged usage also caused blindness.

The belladonna plant is famous for it's use as a poison. With the exception of cattle and rabbits, all animals will go into paralysis or die if they eat it. Ancient civilizations made poison arrow tips with the help of this plant. In Ancient Rome, it was used to kill Agrippa the Younger, wife of Emporer Claudius.

Other historical uses include medicinal and pharmaceutical uses. Belladonna was used to treat headaches, motion sickness, and menstrual symptoms, among other things. When Queen Victoria became the first woman to use painkillers during childbirth, the mixture she used contained belladonna. Belladonna was also used as a recreational drug. The plant causes vivid hallucinations when eaten. However, all of these uses are now considered extremely dangerous due to the risk of accidental overdose and death.

Belladonna has a folkloric connection to Witchcraft. People believed that Witches made an ointment out of belladonna that they would rub on their brooms to make them fly. If only that were true. These Pagans were most likely experiencing hallucinations due to the plant's contact with the skin. I've also noticed that some spells and rituals call for deadly nightshade, but of course we are very careful, using the plant with extreme caution. This plant is believed to have a connection with Belloma, the Roman goddess of war. Roman priests used belladonna in rituals in order to invoke feminine aggression or the frenzy of battle.

So why would anyone name their child after this plant? Because I've seen it used as a girl's name very occasionally. I suspect it's partially for the same reason that names shoot up in popularity every time it's given to a demon child in a horror movie. It has a Gothic allure. And it's a very beautiful name. It even has the fashionable Bella nickname. I don't think the name is all that controversial, no one will be shocked to discover that deadly nightshade is deadly. But Neo-Pagans respect the plant rather than fear it. And if parents keep that attitude than they should definitely consider it.