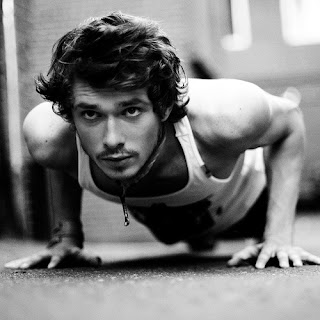 Expedite's connection to the Olympic games is less obvious, but I think it's very fitting.

Expedite (pronounced "EK-speh-dyt") is a Latin word derived from expeditus, meaning "free the feet from fetters" or "liberate from difficulty." In Ancient Rome, expedites were types of foot soldiers. Because they carried very light equipment so they were the fastest warriors and often marched away from the pack. And yes, this is where the term "expedite shipping" comes from. Expedite is also the name of a controversial saint.

Historical details on Saint Expedite's life are hard to come by. Some sources say that he was a Roman soldier who converted to Christianity and was later martyred. Others say he was Armenian. All the statues certainly portray him as a handsome, young soldier of some sort. Along with Saint Bridget and Saint George, Expedite is one of the more magickal saints that have a reputation for assisting the witchy persuasion. This leads some to believe that Saint Expedite is actually Mercury in disguise, the Roman deity of messengers. Of course, many Christian devotees will deny that.

But that's not the only reason that he's so controversial. Saint Expedite first became popular in the Middle Ages. He was particularly well liked in Sicily and South Germany. He became so popular that he had his own cult, and the Vatican was afraid that it would splinter the Roman Catholic Church. They failed at putting an end to Expedite's worship. But they did manage to get him removed from the official roster of saints. Even today, finding his name there would be very unlikely.

Saint Expedite is the patron of speedy deliveries, fast action, and quick solutions. He has no patience for delays or bureaucracy of any kind. He wants things done yesterday. He's the guy you turn to when you have an emergency and there is not a moment to loose. Saint Expedite is particularly popular in Voodoo, where he is used to represent spirits of the cemetery.

Expedite has never been a common name in the United States, and you're bound to have a hard time finding it in baby name resources. I think that this name has fallen so far into "vocabulary word" territory that it might be a little hard to accept it as a given name again. But it does have variations like Expeditus, Expiditos, Expedito, and Espedito. And any name associated with speed would be great for an athletic person. So I like it.