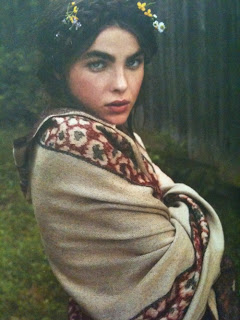 Another name that is Olympics related is Laurel. A laurel wreath was the traditional prize of the Ancient Olympic games. So let's take a look at Laurel.

Laurel (pronounced "LAW-ruhl") is an English name ultimately derived from the Latin laurus, and it's always been in reference to the plant. Laurels are evergreen trees that grow in the Mediterranean region. The plant is actually called the bay laurel, and this is where the bay leaves used in cooking come from. Although the flavor is popular, the leaves can damage internal organs when eaten, so they are typically removed after cooking. They also make berries and small yellow flowers.

In Greek mythology, laurels have a strong connection to Daphne. Daphne was the one who took a vow of chastity and turned into a tree when Apollo pursued her. The tree she turned into was a laurel tree and daphne is the Greek name for this species. Laurels are particularly sacred to Apollo and they should adorn any altar dedicated to him. The famous wreaths were symbols of high status. This association was adopted by the Romans as well, who believed that the laurel was a symbol of victory. In Christian tradition, it is a symbol of the Resurrection as well as prosperity and fame.

Today, Wiccans can use the plant for banishing. When an unwanted person in your home finally manages to leave, smudging the house with laurel will ensure that they never find their way back. It cal also be used for dream magick, protection, or luck in athletic competitions. People who practice traditional medicine might know that the plant's essential oil is often used in massage oil. It is also used for women's troubles like tearing during birth and vaginal infections.

Since the name first saw use in the 1800s, Laurel has switched genders throughout the ages. It experienced some use as a boys name in the United States during the 1920s, where it peaked at #972. Depending on how old you are or how eclectic your film tastes are, you might remember the names Laurel and Hardy, a comedic pair in Hollywood's early cinema. Laurel is considered a masculine plant in Neo-Pagan traditions. But it has been used far more as a girl's name, particularly in the 1950s when the variant Laura was also popular. It peaked at #283. It now ranks at #927 after a two year hiatus from the charts. The feminist historian Laurel Thatcher Ulrich is famous for uttering the phrase, "Well behaved women seldom make history."

Unfortunately, I can pretty much assure anyone who wants to use this name that it will constantly be confused with Laura or Lauren. But if you really love it, go for it. It's a name I could never use because I have a hard time pronouncing it, but I love it for other people's witchlets.