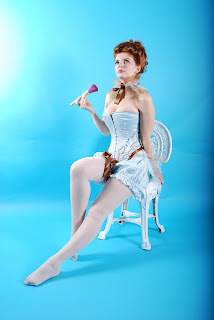 It's a blue moon tonight! For those not familiar with the term, a blue moon is when a full moon occurs twice in one month. It happens every two and a half years, so I hope you're planning to magick up something important tonight. But it also makes it the perfect time for me to profile Bluesette.

The name Blue has been getting a lot of press lately thanks to Beyonce. Her daughter Blue Ivy got immediate attention from name enthusiasts, and the reaction ranged from ambivalence to mild dislike. Personally, if I was the mother and I had to use those elements I would have pushed for Ivy Blue, because it sounds more like a name and not like a species of ivy, but whatever. In the scheme of "crazy" names, not a big deal. And ever since Blue Ivy, other little Blues have born too.

With that type of press it might look like the parents of a Bluesette are trying too hard. But it's more likely that they're just really into jazz music. "Bluesette" (sometimes written as "Blues-Ette") is a jazz standard written by Toots Thielemans in 1962. He does instrumental work, and is famous for his harmonica playing as well as his guitar and whistling. Lyrics written by Norman Gimbel were later added, and it became a worldwide hit when it was sung by Ray Charles. The song is about a girl Bluesette and the singer is comforting her by saying that "love's 'round the corner."

Bluesette has never been a common name in the United States. But with Blue now getting so much attention, someone is bound to come across it. And it's even got a botanical reference: bluesette is a variety of dahlia.

Bluesette presents a bit of an aesthetic challenge. The song has since faded into obscurity and to people who don't know anything about jazz music, the name looks...fake. It looks made up. Technically it is made up, but some people equate "made up" with "thoughtless and meaningless" when it comes to naming children. That's not meant to deter anyone, I like Bluesette. But if you get some negative reactions that's probably why.

Blue or Blusette would be a meaningful choice for any child born during a blue moon. A rare name to go with a rare night.