Name Round Up: 13 Names from Mother Goose 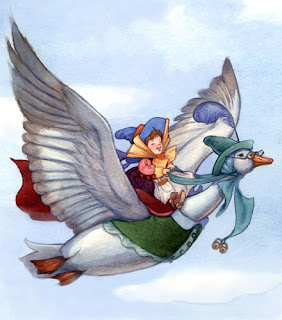 Anyone who was four years old at some point in their lives has heard of Mother Goose. She is a particularly important cultural figure in England, where it is traditional to put on Mother Goose plays during the holiday season. Some people wonder if Mother Goose is supposed to be a witch. After all, she is a crone and she does have a broom (although she prefers to ride her enormous goose) and a witch-like hat. I'm not convinced that that was the intention. She could simply be an archetypal country woman wearing the traditional dress of Wales. However, many Neo-Pagans believe that the image of Mother Goose comes from the goddess Holda, who's spirit companions were wild geese. The identity of the real life Mother Goose who wrote these stories and rhymes is a mystery.

It seems like most of the names in these poems were selected because they rhymed, but that doesn't mean that there aren't gems to be found. Here are thirteen of them:

1. Muffet. This name will probably have the hardest time separating itself from the famous Miss Muffet. It's hard to not think about curds and whey and spiders.

2. Hickory. I mentioned the "Dickory Dock" connection when I profiled this name. I still think it's beautiful.

3. Blue. This name has been getting a lot of attention lately thanks to Beyonce. It pops up in a number of rhymes, there is "Little Boy Blue," "Betty Blue," and "Blue Bell Boy."

4. Peter. Might be a nice subtle name for Samhain, because he's a pumpkin eater.

5. Hector. Perhaps "Hector Protector" is not one of the more popular nursery rhymes, but his name is pretty fabulous.

6. Bo. As in Bo Peep. Perhaps Americans are more likely to use this as a nickname.

7. Horner. There are quite a few Jacks in Mother Goose stories. One of them is Jack Horner, who pulled a plum out of a Christmas pie.

8. Locket. Another one of the more obscure ones, Lucy Locket is known for loosing her pocket. Locket would be an unusual option, but it's a sweet one.

9. Mary. The nursery rhymes are full of Marys, because for the longest time that was the most popular girls name. A stand-out Mary is the one whose garden grows with silver bells and cockle-shells and pretty maids all in a row.

10. Cole. Old King Cole was a merry old soul, and his name is pretty nifty too. A pretty fashionable choice today.

13. Simon. Simple Simon does not have particularly good luck in his rhyme, but that hasn't hurt the name any. Simon is still an unpretentious classic.

Do you have any favorite names from Mother Goose stories?