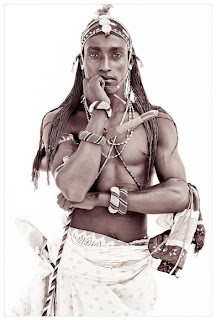 We are still woefully low on African names on this blog, but there's a reason for that.

African names, much like Native American names, don't have the most reliable sources. The meaning that they say it has might not be it's actual meaning at all. Pretty much everyone agrees that Jabari (pronounced "jah-BAHR-ee") is Swahili. One of my sources says that it means "valiant," but it's been wrong before.

Jabari first appeared on the American top 1,000 in the 1970s which is pretty telling. I actually don't have a source for what I'm going to say next as I'm recounting this chunk of information from memory. Please excuse me if I get this wrong. After the Civil Rights Movement, a sizable group of Black parents didn't want their children to have "slave names." Names from Greek and Roman mythology were popular slave names as were more conventional "White" options like Betsy and Will. That was what they wanted to get away from.

So they felt like they had two options. One was to find names from Africa. Unless you knew someone that immigrated from there recently that could be difficult. There was no Internet back then, and even with the Internet now it's hard. The other option was to make up something completely new, thus the birth of the infamous Shaniqua and her ilk. So I'm not surprised that Jabari was one of the African names that they latched on to during this period.

Jabari's peak was in 2006 at #609. It's fallen since then and now sits at #914. There are a few variations like Jabar, Jabbar, or Jabir. There are also three namesakes that I found, two of which are basketball players. The other one's a football player.

Since Jabari tends to be claimed by a specific type of subculture, there are still going to be some people who had never heard of it. Jabari was one of my first name crushes. I'm actually not kidding. It was during my African culture phase that I went through after seeing The Lion King. I've since moved away from it, but I still like the sound.

Image Credit:
Found via http://pinterest.com
Posted by Isadora Vega at 10:10 AM