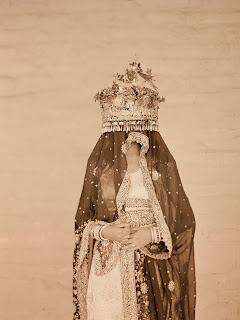 I'm feeling inspired to profile India because the area I live in is experiencing an Indian Summer (meaning an unseasonably warm and sunny autumn).

India is a country that is well known for a lot of things, many of them positive. One of the first things that pops into my mind is how colorful it is. What also pops into my mind is great song and dance numbers, beautiful artwork, elephants, and some beautiful religious traditions. It is the birthplace of bother Hinduism and Buddhism. Lots of the Wiccan religion is based off of Hindu/Buddhist ideas like karma and reincarnation. However, India is also a place with a lot of poverty and overpopulation. Women's rights still have a long way to go there and even though Pakistan separated from India there is still a lot of tension between the Hindus and Muslims. And there are quite a few witch killings happening in Christian areas of the country.

I was surprised to find that this name was on the American top 1,000 in the 1880s through the 1900s. I mistook India for being a newer name. It was the British Raj who started to use India as a given name which is why some people feel like it has a icky colonial streak. Use of India picked up again in the 1970s, which doesn't surprise me at all. India peaked in the 1990s at #427. It had just recently fallen off the charts. In 2008 it ranked #404 in Scotland. There are a few namesakes like India Hicks and India.Arie.

If you choose to use India, I don't think that there will be much of a backlash. While this name might be slightly controversial in England, I don't think that many people in America will make the colonial connection. But, as much as I love this name, there is always a risk when you name a child after another country. Things might be good between our two nations right now, but we never know what will happen.

Still, India is a lovely name. It's one that I would definitely consider using. I feel a connection to the country even though I've never been there (Ganesh is my guy, after all). So I think it's a nice one for those of the Witchy persuasion to use.

Image Credit:
http://kissthegroom.com/
Posted by Isadora Vega at 9:29 AM