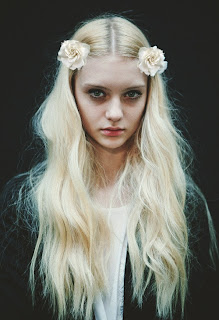 I have not one, but two requests for Persephone. Although she is often seen as the personification of spring, I actually think the name is more appropriate for this time of year.

The meaning behind Persephone (pronounced "per-SEF-oh-nee") is a little bit of a mystery. It could derive from the Greek pertho ("to destroy") or from phone ("murder"). She may be a Greek and Roman goddess, but that doesn't prove that her name comes from either language. In fact, the multiple spellings of her name in ancient sources suggest that the Greeks found her name difficult to pronounce, which would suggest that it was foreign to them. Some historians believe that worship of her, as well as her mother Demeter, predate the Olympian pantheon.

Persephone is the daughter of Zeus, king of Olympus, and Demeter, the goddess of the harvest. She is essentially a vegetation goddess, although she is also considered to be the goddess of the seasons. She was commonly worshiped alongside her mother, and in some cases it was forbidden to speak her name due to her association with the dead. When she was adapted into Ancient Roman culture one of two things happened depending on who you ask: she either kept her name or she was merged with Proserpina. Most people are familiar with her story.

Persephone was sheltered away from the other gods by her mother and grew up living amongst nature. Somehow she managed to capture the eye of Hades, god of the Underworld, who fell in love with her. Zeus advised Hades to abduct her because there was no way that Demeter would allow them to be together, which is what he wound up doing. When Demeter found that her daughter had disappeared she became so filled with despair that she forbid the plants from growing. Helios, the sun, saw everything and told Demeter what happened. Zeus was so pressured by the other gods and by the cries of the starving mortals that he forced Hades to return Persephone (although in an earlier telling of this story Hecate rescues Persephone, which I quite like).

Hades agreed to do so, but he tricked Persephone by giving her a kernel of pomegranate to eat. If you eat the food of the Underworld you are doomed to spend eternity there. Therefore, Persephone is obligated to spend six months out of the year in the Underworld. This is the Greek mythical explanation for the four seasons.

The new interpretation of the myth that has been circling amongst Neo-Pagans is quite interesting. While Demeter acts like a crazed lunatic on earth, Persephone decides to make Hades work for her affections. Hades sets out to woo his wife and over time she falls for the "dark, tormented bad boy." She also begins to settle into her new life in the Underworld. Here she doesn't have to answer to her overbearing mother. Here she is the boss. And then her mother shows up and Persephone learns that she has killed all of the plants and has left the people of earth in agony. Persephone is torn. She doesn't want to have to choose between two people she loves. So she eats a few seeds of the pomegranate knowing the price of eating Underworld food. Having only eaten a little bit, the gods are able to strike a compromise that will able Persephone to spend six months in each home, therefore bringing balance to the world.

This is why many Neo-Pagans see her as the goddess of empowerment. She could have been the victim but instead coped amazingly well. She also helps her worshippers accept all aspects of themselves: both the darkness and the light. The holidays most associated with her are Mabon and Ostara, as these are the days of her descent and ascent.

Persephone has never been a common name in the United States, although I have seen it used on occasion. I'll admit that it's a bit of a mouthful, and I'm sure there are still many people who would pronounce it like "Per-seh-FOHN." But it's a lovely name. You could use Persie, Seffie, or maybe even Stephanie or Steph as nicknames. I think the goddess gives great energy to this name.