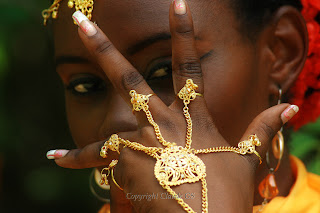 I'm in a dark goddess type of mood this week apparently. Next up is Kali.

Kali (pronounced "KAH-lee") is the feminine form of Kala. This Sanskrit name primarily means "time," but it also means "black" or "the black one" because in Hindu mythology time was created before light. Although Kali is often depicted as having black skin. Sometimes blue skin. She also has a very long tongue. She looks corpse-like to be to be perfectly frank. Since Kala is another name for Shiva, Kali is often considered his consort.

Kali is not evil. Yes, I can see how the scary face, bloody sword, and necklace made out of various human body parts can throw you, but she's actually on our side. Kali is a warrior against evil forces and she is seen as a benevolent and protective mother goddess. She is sometimes called Ma Kali, meaning "black mother." As you can guess from her name, Kali is the goddess of time and death. She is also the goddess of destruction and creation. Kali will destroy aspects of yourself that keep you from reaching your true path in life. In Wicca, she is one of the goddesses in the popular Goddess chant.

Her most famous legend involves the demon Raktabija. The goddess Durga and her assistants attempted to slay Raktigija with various weapons. But every drop of blood that Raktabija spilt transformed into a clone of himself. Durga's forces became overwhelmed. So Durga summoned Kali or transformed into Kali, depending on who tells the story. Kali defeats Raktabija by drinking his blood and eating his clones. Pleased with her victory, she danced on the corpses.

In all likelihood, Kali rose to popularity due to it's similarity to familiar names like Callie and Kelly, not because of it's connection to the goddess. It's peak was in the 1990s at #389. It now ranks at #493. In 2008 it ranked #284 in Canada and #450 in Scotland. Once they find out the name's past, many people find it empowering. Others find it too heavy. I remember a function that I went to where we were trading magickal tools and I had a hell of a time getting rid of my Kali statue. Someone told me, "Kali brings about drastic change, and not everyone wants drastic change." So Kali is one of those very powerful goddesses that many Neo-Pagans are careful around.

Kali is in the unusual position of being very formidable and dark but also completely accepted into the mainstream. I almost get a cheerleader vibe from Kali, as strange as that is. It fits into both the mundane world and the magickal one.