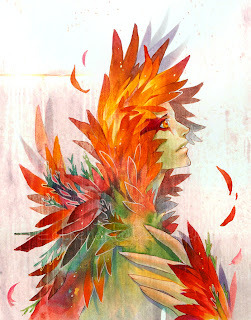 Sometimes my brain goes on tangents and I start thinking about names that might exist. Back in the day when I profiled Vertumnus, I thought, "Does Vertumnus have a brother named Autumnus?" It seemed logical. Well no, he doesn't. That would be fun, but he doesn't. Still, Autumnus is a real name.

Autumnus (pronounced "auh-TUM-nus," I assume) is a Latin, or perhaps Etruscan, name. It means pretty much what you think it means. Sometimes spelled auctumnus, it is the Ancient Roman name for this season. Whether or not it was used as a given name in Ancient Rome I haven't a clue, but I have seen Autumnus in some baby name resources.

I'm not sure what I can say about this season that I haven't said in other posts, but I'll try to find something. This season used to be called Harvest before we fell upon Autumn and Fall. It is worth noting that the term "Fall" is almost obsolete in Britain and far more common in America.

Autumn, while potentially a great sounding boys name, has been dominated by the girls for years. It's been in the charts since the 1970s and now peaks at #69. In fact, with the possible exception of Winter, all of the seasons have been claimed by the girls in a big way. At least in the United States.

Autumnus is a great way to get around all that. I don't think anyone would question that Autumnus is for boys. It has a lot of the same sounds as Atticus or Augustus, which makes it seem more familiar than it actually is.

Autumnus has become one of my favorites. So if you have a thing for Latin names (like I do) and want something that represents the season, you can't go wrong with this one.