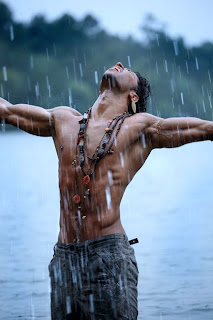 Here is a mythical name that I think deserves a little more love.

Osiris (pronounced "oh-SIY-ris") is actually the Greek form of this god's name. We know a lot of the Egyptian gods by their Greek names. His name in Egyptian could be written as Asar, Asari, Ausar, Aser, Wesir, Usir, Usire, or Ausare. The meaning of his name is unknown. However, Osiris had many titles including "Lord of Love," "Lord of Silence," and "He Who is Permanently Benign and Youthful."

Osiris is the son of Geb (the earth) and Nuit (the sky), husband and brother to Isis, and brother to Seth. He is considered to be the king of the gods in Egyptian mythology. Typically, he is depicted as a green-skinned (how's that for witchy?) man. He was the first Pharaoh, so he has a Pharaoh's beard and a crown. The lower half of his body is mummified, which symbolizes his status as the god of the afterlife. Osiris is a very important god as he was credited with bringing civilization into the world through agriculture.

The story of Osiris' death was central to Ancient Egyptian culture. Isis favored Osiris over Seth, and Seth became jealous. He also wanted his brother's throne. So Seth had a beautiful chest built and painted, and said that it would be a gift for whoever could fit inside of it. Osiris hopped in, and Seth sealed the box shut and threw it into the Nile River (some believe that the Egyptian sarcophagus was based off of the box in this myth). And then Isis brought Osiris back to life for a short time and they conceived Horus.

Worship of Osiris was quite popular in ancient times up until the 600s, which is quite a long time. People who witnessed Osiris' festivals described them as "gloomy" and "mournful." There were professional reenactments of the story of his murder, resurrection, and Horus' revenge. People who joined the cult of Osiris would have been particularly interested in the concept of immortality. After he died, Osiris became the guardian of the underworld and all who die face his judgement. Osiris was sometimes called "king of the living" because the Ancient Egyptians believed in life after death, and that Osiris had a glorious kingdom waiting for them.

He also became associated with the cycle of life and the first day of his festival also signaled the beginning of the harvest. Another annual custom was the making of "Osiris beds" which were planters in the shape of Osiris filled with soil and seeds. Wheat, and by extension bread, was considered to be Osiris' body. Doesn't all of this sound a little...familiar? Well, as it turns out, just like a some scholars believe that the Virgin Mary is actually Isis, some believe that Jesus' story comes from the myth of Osiris. Some sources state that Isis resurrected Osiris on December 25th, I'm not absolutely certain if that's true but he is heavily associated with the Solstice.

I was slightly dismayed to find that Osiris is now the name of a shoe company. Osiris is also the name of a planet (not one from our solar system, obviously), and there are a few comic book characters with this name. It has never been a common name in the United States, but there are more real life namesakes then I thought there would be. Quite a few of them are artists, so it might not be their birth names.

I think the name Osiris is really awesome. There's something really powerful about it, but also kind of suave. Similar to how I feel about Apollo, another underused name. So I'm hoping more people will consider it.