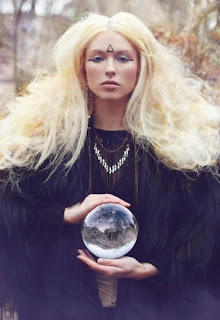 Granted, silver is important to Neo-Pagans year round, but it is a color associated with the Yuletide season too.

Silver is an English word derived from the Proto Germanic silubra. It's earliest known form could have possibly come from a language in Asia Minor. As far as I can tell it has always been used for the metal. Silver could also be an action as well as a thing. To silver something would be a process similar to gilding. Only with silver. Obviously.

Since ancient times, silver has been associated with the moon and, by extension, goddess energy. Silver reflects light much in the same way the moon reflects the light of the sun. It is sacred to Isis and Arianrhod. Silver connects to all things feminine, flexible, creative, and emotional. Silver is a very important metal in alchemy. It is one of the seven sacred metals which is what existed before the periodic table of elements. In meditation silver is associated with the sixth chakra, also known as the third eye.

Silver appears in lot of macabre folklore as a protective charm. A silver bullet is said the kill werewolves. Magic mirrors are commonly made out of silver. Silver is believed to have purifying effects, which might come from the observation that water kept in a silver pitcher takes longer to get scummy. Silver is used in rituals to encourage peace and harmony. Silver is used to make jewelry, currency, and mirrors. Medically, it has antibacterial properties.

One well known Neo-Pagan with this name is Silver RavenWolf. RavenWolf is the leader of the Black Forest Circle and Seminary, which is an organization comprised of several covens throughout America and Canada. But her primary claim to fame is as an author of both fiction and nonfiction. Just from my experience it seems like many people either love her or hate her because her writing tends to be geared towards what we call the "fluffy bunny" crowd ("fluffy bunny" is slang for "teenagers who take up Paganism because they want to shock their parents").

Silver has never been a common name in the United States. As I keep pointing out, "-er" names are becoming increasingly fashionable, even for girls. There is a strong association with femininity here, but Silver can certainly work for a boy as well.

This is a new favorite of mine. Silver is a name that sounds gentle yet strong. I think it's a great name for a little witchlet.

Okay guys, there are only two nominations for Pagan Name of the Year. Lame. Lame I say! I need more! More! There's only 12 days left!