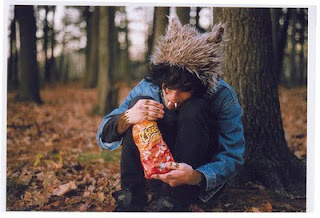 The Harry Potter character is monstrous, and the deity is quite frightening as well.

Fenrir Grayback is a werewolf who fights on the side of Voldemort. He is vicious, savage, and enjoys attacking children. He wants to create a race of werewolves to overthrow the wizards. His plan is to bite young children and raise them away from their parents. Voldemort promises him prey in return for his services. He's not a particularly prominent character, but he leaves Bill Weasley badly scarred in a battle.

Not surprisingly, Fenrir Grayback has two names that have something to do with wolves. Grayback is most likely in reference to grayback wolves. Fenrir (pronounced "FEHN-rir" I think) is a monstrous wolf from Norse mythology. His name is Old Norse for "fen dweller." He is the son of Loki and the giantess Angrboda. He has two wolf children named Skoll and Hati, who chase the sun and the moon respectively.

When he was a puppy, the other gods paid him no attention. But as he grew to an enormous size, the gods got nervous. It is foretold that Fenrir and his family will kill Odin on Ragnarok, and therefore destroy the world. The gods agreed that they had to neutralize his power.

However, no one had the courage to face Fenrir. So they decided to trick him. They told him that they believed him to be weak. Fenrir wanted to prove himself, so he let the gods chain him. He broke all the chains very easily. But then they brought out a magic chain that looked as thin as a ribbon but was immensly strong. Fenrir became suspicious when he saw this chain, so he asked the gods if one of them would place his hand in Fenrir's mouth. Only Tyr, the god of war, was brave enough to do this. Fenrir could not break free of the magic chain, and bit off Tyr's hand in revenge. The gods carried him off and chained him to a rock. Astronomers were inspired by this deity when they bestowed his name to a moon of Saturn.

Fenrir as a name has caught the imagination of those that love wolves. Alternative names include Fenris and Fenric. I seem to remember a reader saying that she considered Fenris for her son. It has never been a popular name except in comic books and video games, and it's history may explain why. But it's going to appeal to some because it is a strong warrior's name. If I met a young Fenrir on the playground, I would be very intrigued.