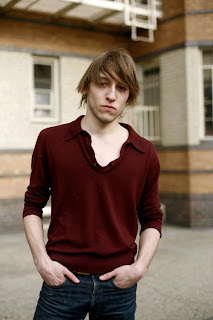 I have a whole sea of Harry Potter names waiting in the que, and it's kind of overwhelming. With my brain screaming, "Oh, just PICK ONE ALREADY!" I start this post.

I have to admit, the only time I put one of the Harry Potter books down in disgust was because of Gilderoy Lockhart. I found him so relentlessly obnoxious. He becomes the professor of defence against the dark arts in Harry Potter and the Chamber of Secrets. He is also an author, writing about his encounters with dark creatures (which all turn out to be done by other people) and he becomes a celebrity for that. Gilderoy wants to be connected to Harry Potter for publicity, which embarrasses Harry numerous times. Seriously, you want to punch him throughout the book.

He does have a snazzy name though. Gilderoy (pronounced "GIL-deh-roy") is a variant of the Irish Gaelic name Gilroy, meaning "son of the red-headed." Some sources might list it as a French name meaning "gilding of the king," which seems intuitive but it's not true. Some names are tricky like that.

This name also belonged to one of the "King of the Gypsies." Sometimes, people who took this title had no ties to the Romani people, but other times this was the name of a low standing person who acted as a laison between Romani and non-Romani people for a specific purpose. Gilderoy Scamp (what a great name that is) was such a person, but not much is known about him.

There are several other places where this name appears. Gilderoy is also the name of a rural neighborhood in Victoria, Australia. A novelist named Algernon Blackwood created the children's novel Dudley & Gilderoy: A Nonsense. The book was about a cat and a parrot who befriend each other. The expression "to be hung higher than Gilderoy's kite" meant that you would be punished more severely than the worst criminal.

Gilderoy has never been a popular name in the United States. Maybe some people find it too...aristocratic? It sounds like it could be aristocratic. The name doesn't appear to be tied to any nobility, so I don't see it that way. The Gypsy connection is enough to get me to like it, and it's similar to another name that's growing on me: Pomeroy. But will it catch on with other parents?

Image Credit:
http://thesartorialist.blogspot.com/
Posted by Isadora Vega at 12:26 AM