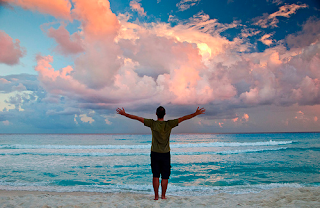 I've been mentioning the Louisiana Purchase a lot this week. It ties in with a major historical event called the Lewis and Clark Expedition. It's named after it's two leaders, and their full names were William Clark and...Meriwether Lewis? His name was really Meriwether?

Meriwether (pronounced the same as "merry weather") is a Middle English name that means...well, I think it's pretty apparent, don't you? I assume that it was also used as a moniker in England, so maybe this name isn't 100% American, but I love the Lewis and Clark expedition so I'm profiling it.

Thomas Jefferson completed the Louisiana Purchase, which essentially bought the rest of what is now the United States from the French. He put together the Corps of Discovery, which would a) record scientific data on the animal and plant life and b) establish sovereignty over the Native peoples. The Corps was an eccentric group of people, a combination of privates, sargents, French Canadian trappers, one Native American woman with her baby, Clark's Black slave, and a newfoundland dog.

Meriwether was given his name because it was his mother's maiden name. In his youth, Lewis was known for his interest in plants, which was encouraged by her mother, who used herbs for medicinal purposes. His keen observation of flora and fauna would serve him well later in life. As an adult, one of his hobbies was sneaking out in the dead of night during the wintertime to hunt with his dogs. He grew up to become a child protegee of Thomas Jefferson. It was only natural that Jefferson give Lewis the honor of heading the expedition. Lewis wanted another commander with him, so he wrote to his best friend Clark asking for him to lead by his side.

Given the cheerful meaning of his name, it's kind of ironic that Meriwether Lewis suffered from depression. Although in excellent physical condition, he was prone to being "moody, speculative, and melancholic." His death after the expedition is generally accepted as a suicide from a gunshot to the head, although there is some debate. He never married or had children.

I would like to think that I'm pretty open minded when it comes to names. But even I would be uncomfortable with the idea of naming my son Meriwether. I think a lot of people would agree with me. But it would make a lovely girl's name! I read somewhere in the baby name blogging world that someone met a little girl named Merryweather.

Meriwether's sad ending might be a turn-off for some people. But I prefer to think of the person he was and what he accomplished, which is pretty extraordinary. It's particularly appropriate for a child born in...well, good weather. Or someone with a cheery deposition. Meriwether is great for someone with a sense of adventure.