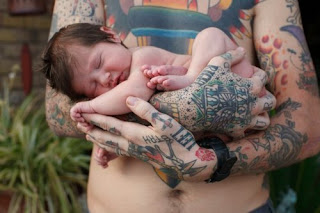 Not to stomp all over the blogging territory of the excellent For Real Baby Names, but Offbeat Mama recently posted a reader question asking how offbeat parents came up with, or how they think they will come up with, their children's names. The comments that followed, and the names that were shared, warm the cockles of my nerdy heart. You can take a look here.

What? You don't want to leave my charming self? Not a problem, I've compiled most of them for you, and most of these are real born children:

There are also some stand-out name stories as well:

-"Jonathan after his paternal grandmother (Johnnie Mae), and Sebastian because we liked it. If I ever have a girl I would name her Annali or some variation, after my foster mother (Annie Lee), or Gianna, with middle name Parker (family name)."

-"For my son, we wanted an Irish or Scottish name because both our families are from that area. I originally wanted Liam, he wanted Ian (we agreed on Connor for his middle name pretty quickly), but when he was born, neither name seemed to fit! My mom said, after about 8 hours of him being first-name-less, "what about Gavin?" I was holding him while he slept, and asked him, "Are you Gavin?" and he opened his eyes and looked right at me. I looked at his dad, he nodded, and that was that."

-"While I was heavily into hair metal as a young teen in the late 80's-early 90's, I was fortunate enough to be exposed to other music. One of my favorite songs from those days was "Veronica" by Elvis Costello; the video still makes me cry to this day. While the song itself is so sad, I get the sense that the Veronica of the song once had a very strong spirit and was well-loved. So my little girl is named Veronica."

-"My mom went to our Theravada Buddhist temple and consulted with the monks, whom refer to an 'ancient' script-type thingy and used his "due date" to provide my mom with a list of potential names. A list for every day of the week (some days had two; a daytime and a nighttime name) for when my unborn son decided to come. To be honest,some names we did NOT like… We liked two specifically— Thursday and Sunday. I pleaded with my mom to let us pick either but being the hard-core (read: superstitious) Buddhist that she is, we had to succumb to whatever Bebe Boy decided. Guess what day my water broke 9 days after my due date? Sunday."

-"My son is Drake Alexzander Arthur. When I was pregnant we were calling him the little dragon because of the heartburn he was so generously giving me. That morphed into Drake. Alexzander was because we like Alexander and Zander. And Arthur is my step fathers middle name."

-"Comic books, historical figures & virtues. That's where our three name choices came from. Our boy's choice was Remington, because I wanted Remy (for Remy LeBeau aka Gambit). Our two girl's options were Mercedes (for the virtue) and Tesla (for the genius scientist). The boy's middle name is Dean, a family name passed down for the past three generations on my husband's side. And the girl's middle name choice was Rose, because it's classic and I like it.

Luckily, we had our boy Remington Dean so we didn't have to decide between two awesome girl's names".

-"I'm biracial (Hawaiian, German, Scottish, & English) my husband is 100% Tongan. Polynesians have a tradition of giving our children the longest names ever, and we're beginning to understand why.

I'm not pregnant yet, but we have discussed baby name options quite a bit (since most of our friends are pregnant or have children). It's been important to us that our kids have names that represent each of the families/cultures they come from:

In the Polynesian culture, the tradition is to name your children after family members you admire so that you child will 1) know their history and 2) adopt those admired traits as their own. Each one of the names we picked out are family names."

-"My daughter's name will be Shannon Christina. Shannon (after the area my husband's family immigrated from, and because the name means Little Owl or Wise Person. My granddad was Etowah Cherokee, a clan of teachers who wore cloaks of white feathers.) Christine is a family name dating back 150 years in my family and was the name of my great-great-grandmother, who raised a daughter Anna- who had a college degree before women had the right to vote, ran a successful business in the Great Depression, and visited the old folks in the nursing home in her 70s. He had no idea of the history when he suggested it, but once said… the name felt perfect for her."

-"I once had a dream where I was a mother to a little girl. I never said her name aloud in the dream, but when I woke up, I was absolutely convinced that it was Galaxy Rae. Since dreams mean so much to me, I took it to heart, and I've planned on giving that name to my first daughter ever since.

Unfortunately, TJ wasn't up for it at first. I'm not sure when the change happened, but while we discussing where we planned on living in the future, he said he didn't want to raise Galaxy in the city like he was."

-"When I had my son (who is turning 4 now shortly) I was a single offbeat mama with the last name JOHNSON. Yeah, so the last thing I wanted was for him to grow up with a name that 15 other people in his class would have. I loved the name Riley, but I know seven or eight different Riley. So I changed it up and named him Rhyle. Rhymes with Kyle. It works for him he's riled up all of the time and fits him to a T!"

-"I used to work at a call center, and kept a list of first names I thought were cool and interesting. Through this method, I found the name Everly, a boy's name (listed in my giant baby name book as Everly, meaning "singing"). I liked the ring of it, and since my husband and I are both musicians, we loved that it had a musical meaning. I had it in my mind that if I had a boy, I would name him Everly. Then when we found we were having a girl, we decided to go ahead and keep the name, but change the spelling to a slightly more feminine version: Everleigh. That's our name story. Everyone who thinks it's weird always asks, "is that a family name?" It is now. It is now."

-"My boys are Rain and Eden. I wanted them to have names that were softer and less gendered than typical boy names, but not so odd that they'd get teased their whole lives. It probably helps that I live in the Pacific Northwest, where hippie, nature-ish names aren't all that uncommon."

Rock on, Offbeat Mama. Seriously though, go check out the comments thread.

(As a side note, I have no idea how that one parent got the idea that Everly means "singing." It means "boar meadow." Just don't say that to her face.)

Image Credit:
Found via http://www.rocknrollbride.com/ I think
Posted by Isadora Vega at 9:10 AM

Email ThisBlogThis!Share to TwitterShare to FacebookShare to Pinterest
Labels: name round up, name stories