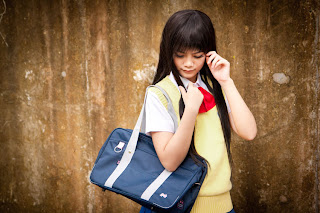 Many of the Harry Potter name lists on other name websites only include Welsh, Gaelic, and Latin names for the most part. The more foreign names tend to be ignored. But not here.

Cho Chang is a Ravenclaw student first introduced in Harry Potter and the Prisoner of Azkaban. She meets Harry while playing against him at a quidditch match. Harry has a crush on her from the moment he first sees her. But in the next book, Cho is dating Cedric Diggory. Cedric's death greatly upsets Cho, and makes her determined to fight against Voldemort. She also started to date Harry, but the relationship was doomed from the start, and it shortly fell apart.

Given the character's last name, my assumption was that Cho was a Chinese name as well. It is used in China, but sources only list it as a Japanese name meaning "butterfly" (it's a variant of Chou) or as a Korean surname. As a Korean surname, Cho is very common. Famous namesakes include Korean go players Cho Chikun and Cho Hunhyun, Korean rock musician Cho Yong-pil, American comedian Margaret Cho, and (unfortunately) the boy responsible for the Virginia Tech massacre, Seung-Hui Cho.

Butterflies have many different meanings in Japanese culture. Metamorphosis and transformation are the most obvious. Taking this metaphor one step further, there is a Japanese belief that butterflies are the souls of the dead. Butterflies are messengers, if you follow one they will lead you to a mystery's end. They symbolize spring and therefore represent joy. They are also a prominent symbol in Shinto weddings, as they are used to symbolize womanhood and happiness in marriage. It's a tradition to give a newlywed couple two large paper butterflies. Butterflies are a popular motif in Japan, appearing on many traditional family crests.

J.K. Rowling usually picked names for their meanings, so I had to wonder why she selected Cho. I have to admit that I didn't see the connection to the character other than it's Asian descent. But in this case, you have to look at the first and last names together. Chou Chang is Chinese for "melancholy." This might be in reference to the character's emotional state after Cedric's death. In the Mandarin translations of the book, the character is called Zhang Qiu, Zhang being a variant of Chang and Qiu meaning "autumn."

So we know that Cho is a common name in many Asian countries. I don't see why it couldn't be used by a non-Asian family. Would it look strange? Maybe. But we live in a culturally diverse world and I don't see why we can't respectfully use each other's names.