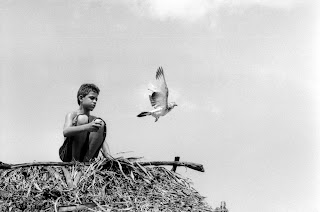 We are now almost in the middle of July, and the dog days of summer are here in the upper hemisphere. It's a good time to profile a name related to this month.

Julian (pronounced "JOO-lee-in") is the name of Greek origin who's meaning is somewhat debated. One source lists it as "Jove's child." Jove is another name for Jupiter/Zeus, king of the Gods in the Roman/Greek pantheons. Another source states that it's possibly derived from the Latin word lulus, which was used to describe the first hairs on a young man's chin. Because of this, "youth" is also used as an accepted meaning. In any event, Julian is a variant of Julius, which was the clan name of many Roman rulers.

The month of July was named by Augustus in honor of his predecessor Gaius Julius Ceasar, who was born during this month. The month was previously known as Quintilis, meaning "fifth." Ceasar is well known for amassing power through populist tactics, meaning that he relied on the support of his citizens. He was also the first Roman ruler to cross both the Rhine and the English Channel. When he assumed control of the government, he reformed Roman society and government, which lead to his assassination.

But there was an Emperor that is perhaps more important to the Neo-Pagan religion: Flavius Claudius Julianus, also known as Julian the Apostate. He was made Caesar during the Constantian Dynasty, and was the last non-Christian ruler of the Roman Empire. He rejected Christianity in favor of Paganism, and was trying to bring the Old Religion back to the Empire. Unfortunately, he died in battle, so his vision was never completed. Many Neo-Pagans today wonder how history would have been different had he succeeded.

There have been more recent namesakes as the years have gone by. John Lennon's son Julian is now a musician himself, and was the inspiration for Paul McCartney's "Hey Jude." The song was originally called "Hey Jules," but Paul decided that that would make it too personal.

If you are looking for a Wicca-lite name that won't look out of place in a group of non-Pagans, Julian is a good choice. It has never left the top 1,000 in America but is now enjoying massive use and ranks at #53. It's also #10 in Austria, #13 in Germany, #18 in the Netherlands, and #37 in Norway. If you are like me and you have an allergy to any name that is mega popular regardless of how much you like it, Julian is sadly out. Let's see how it's variations rank.

Julius has never been out of the top 1,000 either, but it's peak was in the 1910s where it ranked #112. Jules peaked during the same time and is currently not a popular boy's name, and is now occasionally used for girls. As the Hispanic population grows in this country, so will sightings of little boys named Julio, which peaked in 2005 at #227. Julien has generally been more popular in France, but it peaked in the United States in 2009 at #535. If uniqueness is your goal, you could go with the medieval Joylon or the new-fangled July. There are also many feminine variations, which I will post about when I profile Juliet.

No matter how you feel about it's current popularity status, Julian is a lovely name. It's an ancient clan name that has an air of authority but also sounds like it could be a sweet, thoughtful little boy. I can certainly see why it's enjoying a lot of use.