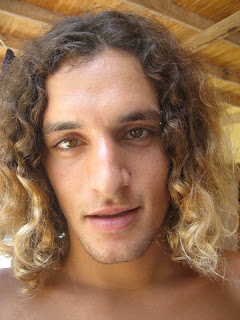 In the Harry Potter and the Deathly Hallows, the three brothers make an appearance. Although "make an appearance" might not be a great choice of words for characters from the wizarding world's fairy tales by Beedle the Bard.

In the Tale of the Three Brothers, the three brothers angered Death by using their magic to create a bridge over a river, and thus not perishing. Death pretends to congratulate them, and offers each a gift of their choice. The eldest brother asked for a wand that would make him undefeatable. The middle brother asked for a stone that would grant him the ability to bring back the dead. The youngest and wisest brother did not trust death. He asked for something that would allow him to leave their meeting without being followed by Death. Death gives him a part of his own invisibility cloak.

The two older brothers meet terrible fates. The eldest loudly boasts about his powerful new wand in public, and is killed in sleep by thieves. The middle brother brought back his deceased fiance with his stone, but realized that she was only an apparition, and hanged himself. But Death could never find the youngest brother until he grew to a rip old age. He gave his invisibility cloak to his son, and greeted Death "as an old friend."

This wizarding fairy tale is based on the Peverell brothers. In order of age, they're names are Antioch, Cadmus, and Ignotus. Ignotus (pronounced "ig-NOH-tus") is the ancestor of Harry Potter, and the reason why the Potter family had the invisibility cloak. You would think that Voldemort would be the descendant of Antioch, the one with the elder wand, but that's not the case. His ancestor is Cadmus, the owner of the resurrection stone. These three powerful objects are the deathly hallows of the title.

Once again, J.K. Rowling shows her command of the Latin language. Ignotus is a Latin name literally meaning "unknown." This is appropriate since the character's location is unknown to Death. J.K. Rowling did not invent this name, it had been used before. The Hungarian author Hugo Veigelsberg often used Ignotus and a nome de plume.

This name is a variant of a much more commonly used name, Ignatius, derived from Egnatius. The spelling was altered so that it could more resemble ignis, Latin for "fire." Ignatius is a name worn by many saints, including Ignatius of Antioch. J.K. Rowling often uses saints names and their stories as inspiration for her characters. Other variants include Ignatz, Ignace, Ignasi, Ignazio, Ignacy, and Ignacio.

Ignotus is an interesting option that doesn't scream, "I AM A HARRY POTTER FAN," in the same way that Nymphadora or Bellatrix would. And yet only other Harry Potter fans are likely to immediately recognize the reference. Ignotus has some worldly appeal, since it's variations scatter around the world. Iggy could be a cool nickname. It's the type of name that I would expect to find on an aristocrat's child, although I'm not sure why I have that image in my head. So it's a lovely sounding, unusual choice.