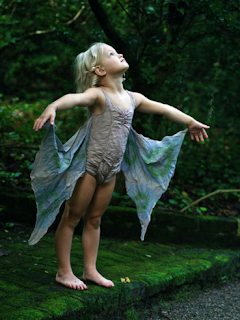 Baby names referencing insects are few and far between. Butterflies are the most charismatic and well loved bugs around, so the majority of insect names is in reference to them. Following behind them may be bees, because their industrious qualities are revered (and the honey doesn't hurt). There are also a few spider names, not technically an insect but they are associated with female power and storytelling. Also the moniker Cricket, which started out as a nickname for Christina, has been getting some attention on it's own. This makes me wonder. Could Cicada be a new possibility or am I just completely bonkers?

Cicada (pronounced "sih-KAY-dah") is derived from Latin and it means "tree cricket." Cicadas live in deciduous habitats all over the world, but for the unfamiliar I'm going to enlighten you on some of the cicada's bizarre habits. Cicadas come in a variety of different colors, but for the most part they look like very large flies. They spend 13-17 years underground. No one really knows why, it might be a way to avoid predators or it might be a tactic left over from the Ice Age. They come out of the ground in order to mate. One of the cicada's most well known attributes is the male's loud chirping song meant to attract the females. For around six weeks they live in the trees, lay their eggs, and die. The eggs hatch, and their larvae stay in the trees for a while until they fall to the ground and the cycle begins again.

The cicada appears in many works of literature. In Jean de La Fontaine's collection of fables, he tells the story of "The Cicada and the Ant." Based on one of Aesop's fables, Cicada spends the summer singing while Ant stores away food. So Cicada starves when the weather turns bitter. In Ancient Greek myth, Tithonus is transformed into a cicada by Zeus which grants him eternal life, but not eternal youth. In the Japanese novel The Tale of Genji, the hero compares a woman to a cicada because of the delicate way she sheds her scarf, like how a cicada sheds it's shell while molting. These insects are also a frequent subject of haikus.

Cicadas feature prominently in Chinese and Japanese symbolism. In both the 36 classic Chinese stratagems and in mythic ninja lore, the cicada is the inspiration for using a decoy (like the cicada's old shell) in order to fool enemies. In Ancient China, high level officials used to wear cicada-shaped jade decorations on their hats. The sound of the cicada's song is used in Japanese film and TV in order to indicate that the scene takes place in the summertime. This insect also symbolizes rebirth, enlightenment, and evanescence in both cultures. Japanese children like to collect cicadas and cicada shells in the summer.

Possibly standing in the way of Cicada's use as a namesake is the fact that many Americans see the bug as a nuisance. Their song keeps you up at night, and their shells and bodies can litter the streets. However, cicada's are very important to the environment, taking down the weaker branches of trees and making the soil better for plants. In many countries, this bug is also eaten by humans.

What spurred this post is the fact that there is an independent bridal shop in my area called Cicada. That got me thinking. It really is a beautiful sounding name. But then I look at pictures of actual cicadas, and I get a little grossed out. Just because I'm Pagan doesn't mean I magically started liking bugs, even though I'm better with them now than I used to be. Still, Cicada is a lovely name, and it fits in well with Cricket. So could this name be given to a person, or is Cicada just weird?