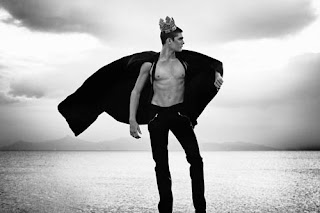 Better late than never, as this is the perfect time to profile to cover the name that this month's title is based on.

Originally, this month was known as Sextilis, Latin for "sixth" because it was the sixth month in the original Roman calender. Emperor Augustus renamed the month in honor of himself. He liked this month in particular because it was a time in which he achieved many impressive accomplishments, such as his conquest of Egypt. Augustus (pronounced "aw-GUHS-tus") is derived from the Latin augere, meaning "to increase."

Emperor Augustus is considered to be the first emperor of the Rome Empire. He was born Gaius Octavius Thurinus, and was adopted by Emperor Julius Ceaser in his last will and testament. He was given the name Augustus when he gained power, an honorific that was given to all emperors. He is well known for heralding an era of peace and prosperity and for expanding the empire dramatically.

There are many namesakes for Augustus and it's variants, many of them royalty. Augustus the Strong and Autustus III were both Kings of Poland, the former was well known for his strength and for supposedly fathering 365 children. Fredrick Augustus III was the last King of Saxony. Philip Augustus was the King of France. In England, Prince William Augustus was the son of George II, and Prince Augustus Fredrick was the son of George III. Non-royal namesakes include Augustus Dickens, brother to Charles. August is the name of the main (female) character in the novel The Secret Life of Bees by Sue Monk Kidd. Augustus Rookwood is a minor character in the Harry Potter series. And I can't help but think about Augustus Gloop, the pudgy boy who gets caught in the pipe in Charlie and the Chocolate Factory.

Augustus has been in the American top 1,000 for a while. It was most popular in the 1880s at #211. It dipped out of the charts in the 1970s and 1980s, but now it's back and currently rests at #776. August has a very similar trajectory, at least for boys. It could also be used as a girls name. August, with it's crisper, more rustic sound, is more popular with Americans at #429. Other variants include the masculine Augusto and Auguste, the unisex Augustine, and the feminine Augusta and Augustina. Nicknames include Gus, Gustie, or Augie.

If I were to picture boys in a classroom, August would be the popular heart-throb, while Augustus would be the quieter nerdy one. And I mean that as a compliment to both of them. All the different versions of Augustus are great names, it's just a matter of how much uniqueness means to the couple which would determine which one's best. They are all familiar to people, but not all of them are overused yet.