Name Round Up: So You Think You Can Dance 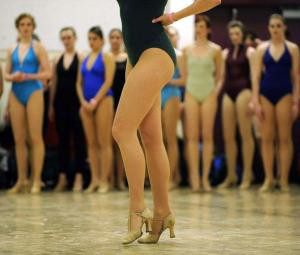 Watching So You Think You Can Dance has become something of a mother-daughter tradition in my family. For the uninitiated, it's basically a televised dance competition. Like Dancing With the Stars only a million times better. Abuelita watched the show when she was alive, and my mom and I still tune in year after year despite the fact that it's been slightly disappointing lately. Since I don't take dance lessons anymore, it fills my childlike desire to watch and be inspired by those who are better than me. And within the seemingly endless sea of Kates, Ryans, Stephens, and Ashleys, there were a few names that made me take notice too.

1. Kherington. This is the sort of name that name enthusiasts don't understand when they see it on birth announcements, but her parents were pretty ahead of their time. She seems to be doing well for herself now, she's appeared in several movies. I'm sure the distinctive name didn't hurt.

2. Artem. I actually wasn't watching the show during the first season, so I don't remember him very well. He came back once as a choreographer and that's the only reason I know him at all. Out of the many Russian ballroom dancing dudes on this show, I like Artem's name the best.

3. Auska. It's pronounced like Oscar, if the speaker has a strong Boston accent ("auh-skah") and it's Japanese. I'm always shocked when there's a ballroom dancer that isn't Russian. Unfortunately, Auska didn't last long.

4. Vitolio. Can't find much on the meaning or origin of this name, but the dancer was born in Haiti.

5. Legacy. Okay, this is not his real name. But it's his stage name and it's how he was addressed on the show. If there are parents naming their sons Epic, I'm sure there are also ones that use Legacy.

6. Comfort. People who don't watch the show may only see this as a stuffy Puritan name. The gritty hip hop dancer changed all that in my mind.

7. Benji. The second season winner was every inch a Benji. That spunky name fit him so well.

8. Sabra. I'm actually surprised that there aren't more Sabras in the world. Sabra was the underdog winner for the third season despite having only been dancing for a year or so. And then she disappeared. She hasn't visited the show or been mentioned at all.

9. Kupono. According to a not particularly reliable source, Kupono is Hawaiian for "justice." Perhaps not surprisingly, Kupono had a quirky style.

10. Hokuto. If you don't recognize this name immediately, it's because he shortened it to Hok. He was a breakdancer born in Tokyo, but I distinctly remember his British accent.

11. Iveta. Another Russian ballroom contestant. She didn't last very long, but I can certainly see the appeal of her name.

12. Ade. A variant of Adam which is apparently well used in some African countries. There was also a contestant named Adechike.

13. Ellenore. Perhaps not such an interesting name in and of itself (some will not be thrilled with the spelling), but I'm putting it here because she changed my perception of Elenor. It stopped being an "old lady" name in my mind and became cool. She's a longtime favorite of mine. I'm still a bit upset that she didn't win the sixth season.

Do you watch the show? There are versions of So You Think You Can Dance produced in other countries, did you notice any interesting names there?