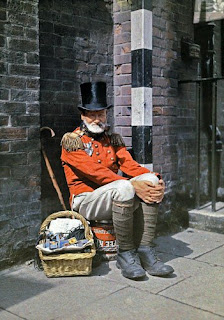 This name is much more Witchy than some people might think.

George (pronounced "JORJ") is derived from the Greek name Georgios, which is in turn derived from the Greek word georgos, meaning "earthworker" or "farmer." Perhaps no one has done more to champion this name than Saint George. Ever since I learned that the "snakes" Saint Patrick drove from Ireland were actually Druids, I wondered if the story of Saint George slaying a dragon is code for something. Are we supposed to believe that Saint George actually slayed a literal dragon?

Of course not. There is no historical documentation on Saint George (except for ones made after he supposedly lived), so one can question whether or not he existed at all. But the legend states that he was a Roman soldier from Palestine who was martyred during the anti-Christian persecutions of Emperor Diocletian. He was not originally a dragon slayer, he just did ordinary heroic knight things like rescuing princesses and such. The dragon stuff didn't appear in artwork until the 1000s.

The story usually told is that Saint George went to a Libyan city that was being terrorized by a dragon. In order to pacify it, the townspeople sacrificed a virgin daily. Eventually, the only virgin left was the princess, but before she could be delivered Saint George came along and killed the reptilian menace. In gratitude, the citizens promptly converted to Christianity. One certainly could read the dragon as a symbol for Paganism, and that's how the story was interpreted during the Middle Ages. After all, human sacrifices were quite common in some ancient Pagan religions.

So it's quite ironic that Saint George is so associated with magic and Witchcraft today. Occurring on the 23rd of April, Saint George's Day is celebrated in a similar way to Beltane and May Day. The eve of St. George's Day is considered to be among the best times for divination, spell casting, and vampire slayings. This day, and it's reputation, is even mentioned in Bram Stoker's Dracula. This day is still celebrated in parts of Eastern Europe. Some Neo-Pagans even equate it with the Green Man, because they are both unconquerable.

Saint George used to only be popular in areas under Byzantine control, but his influence soon spread throughout the city (rumor has it that this was the doing of the Knights Templar). This name is often thought to be one of the quintessential English names. However, the name was rarely used in that country until German-born King George I came along in the 1700s. Five Kings after him have had this name. This is also the name of American founding father George Washington, which helped propelled the popularity of George in this country.

George continues to be a popular name in England (it was #12 in 2008), as he is the patron saint of that country. During 2008 it was also #30 in New Zealand, #66 in Australia, #108 in Scotland, and #156 in Canada. As for the United States, it's still doing well but it no longer dominates like it used to in our parents and grandparents generations. George peaked in the 1880s at #4 and has been trickling steadily downward to where it now sits at #164. There are literally tons and tons of variations: Giorgio, Georges, Jorge, Jurgen, Jeordie, Georgie, and Yuri are just the tip of the iceberg. There are also some lovely feminine forms including Georgiana, Georgia, and Georgina.

George is a straight-laced, traditional, and conservative name. But I can still see the appeal for Witchy-folk. It is a very meaningful option for any little boy born on or at the eve of April 23rd.