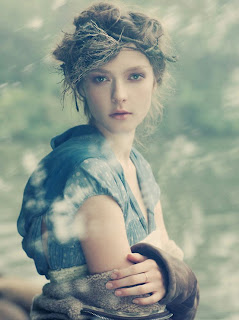 One of my favorite gemstone names, Peridot is not an option that most people consider.

Peridot (pronounced "PEHR-ih-doh") is the gemstone for Libra. They are often confused with emeralds, but chemically the two have nothing in common. Peridots are a type of olivine (another great name idea) which is a common mineral found in lava. Strangely enough, this gemstone is also an alien. It's been found in meteorites. Gem quality peridots are very rare, and they are the only gemstone to come in one color: olive green. They are mined in the United States, Kenya, Pakistan, Mexico, China, Australia, Brazil, Norway, South Africa, Tanzinia, Saudi Arabia, Myanmar, and Sri Lanka.

No one is quite sure where the word peridot came from. Some believe that it comes from the Arabic faridat, meaning "gem." Another suggestion is that it's derived from the Anglo-Norman pedoretes, an old word for "opal." However, we do know that the word peridot itself is a French one.

Peridots hold great significance in many cultures. An Ancient Egyptian legend says that they mined them on an island called Zeberget. They mined during the nighttime because they believed that the gemstone could not be seen during the day. This was very dangerous work because the island was infested with snakes, but one Pharaoh remedied that by driving all of them into the sea. The Romans called peridots "the evening emeralds" because it's color didn't darken at night. Peridots were used to decorate medieval churches. They are highly prized in Hawaii because they are said to be tears from the volcano goddess Pele.

Given their extraterrestrial origins, is it any wonder that Neo-Pagans use the stone to invoke higher powers? Peridots are used for channeling and visions. It is also believed that peridots drive away evil spirits. As a magickal remedy, peridots are used to relieve stress and aid the bloodstream and sinus.

Peridot fits into names that end with an "o" sound like Shiloh, Milo, and Willow. But using it for a name is largely unheard of. It's a strange and elegant name. It's definitely in the running for my future children.