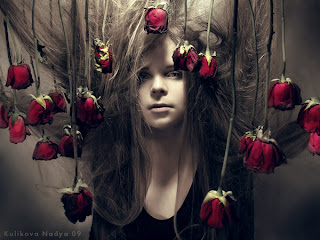 Saranel requested Briar because she knows someone who is considering it for their son.

Briar (pronounced "BRIY-er") is an English nature name. It comes from the West Saxon language and it means "bramble" or "prickly bush." Originally this word was used to refer to all thorny bushes, but now it's used specifically for wild roses.

This name could also be a variant of Briareus. In Greek mythology, Briareus was a giant and a god of sea storms. The son of Uranus and Gaia, he had fifty heads and one hundred hands. He's credited with inventing warships. In the Iliad, Homer stated that only the gods could call him Briareus. Mortals could only address him as Aegaeon. His name comes from the Greek word briaros, meaning "strong" or "sturdy."

But when you mention this name, most people will think less about giants and more about princesses. "Briar Rose" or "Little Briar Rose" is a fairy tale by the Brothers Grimm, but the story is more commonly known by it's French title: "The Sleeping Beauty." I assume most everyone knows the story, so I won't rehash it here. But some might not know why she is called Briar Rose. The reason she has that name is because during the one hundred years when the princess was in an enchanted sleep briars slowly grew around and encased the castle. So the princess was the "rose" in the briar. The original versions of the story involved a Part II in which the prince takes Briar Rose and their two children to visit his mother who has ogre heritage. In typical ogre mother-in-law fashion, she tries to eat Briar Rose and her children while her son is away. In retellings of Sleeping Beauty she's not always named Briar Rose (she's Aurora in the Disney version) so not everyone is familiar with the fairy tale connection.

Briar has never been a common name in the United States. This name is traditionally given to girls but, as I said before, it feels more like a boy's name to me because of the thorny meaning and it's similarity to Brian. That seems to be a growing opinion as I see it suggested as a boy's name more and more. Variations include Brier, Briarly, and Brierly. I've also seen Briarose.

Even though I can't imagine using it for a daughter at all I think it's a great name for both genders. It's strong, has a connection to the natural world, and can be found in literature. What more could a Witch want?