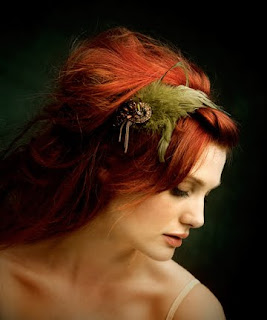 I bet all you readers that were born under the sign of Cancer will be feeling pretty underrepresented on this blog. I'm sorry. It's not my fault that the name of your sign is the same as that of a scary disease. But at least you have a pretty gemstone.

Emerald (pronounced "EH-meh-rald") is derived from the Greek word smaragdos, meaning "green gem," and from the Semitic word baraq, meaning "shine." These gemstones are a category of Beryl. When Beryl is deep green it's an emerald. Blue to bluish-green is called aquamarine, yellow is golden beryl, and pink to red is morganite. In antiquity, they were mined in Egypt, India, and Austria. Today, they are found in many other countries around the world, although some people insist that the best emeralds come from South America.

Several notable emeralds throughout history were mined in Columbia. The Chalk Emerald is a very large one that was owned by a royal family in India. The stone was donated to the Natural History Museum in Washington D.C., where it still resides today. The Mogul Mughal Emerald was also sold in India, as they were much desired by rulers of the Moghal Empire. Other famously huge uncut emeralds like the Duke of Devonshire Emerald and the Gachala Emerald were also found in Columbia. This profiteering of Latin America started when Cortez brought emeralds back to Spain in the 1500s.

Emerald experienced a short burst of popularity in the 1990s, ranking at #853. But perhaps the most popular variation of this name is the Spanish Esmeralda. Esmeralda got it's boost from a work of literature, she is the Gypsy girl loved by Quasimodo in The Hunchback of Notre Dame by Victor Hugo. The book prompted adaptations on stage and on film. As the Hispanic population in the United States is growing, so are little girls named Esmeralda. It first appeared on the charts in the 1950s, it peaked in 2003 at #199, and has now started it's slow descent. The French variation of this name, Esmeralde, has remained rare.

For the sake of simplicity, I'm placing this name in the girl's category. Could Emerald be a boy's name in the future? I have no idea, but I think it could work. In any case, Emerald is a dignified name that signifies royalty and riches. And of course, there's the subtle reference to the Wizard of Oz and to the Slytherin house. So Emerald is a unique option, but not completely unheard of.