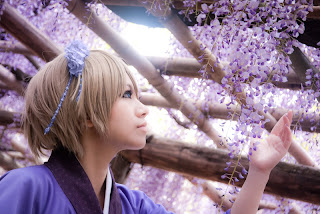 Tired of Rose and Lily? Here's another unique name from the garden patch.

I've just out what exactly a wisteria (pronounced "wih-STEE-ree-ah") looks like when I walked through a small public garden in the city. It's a vine plant. It's flowers kind of look like upside down lilacs. They can be purple, violet, pink or white. This plant is native to the Eastern United States as well as to China, Korea, and Japan, although it can grow almost too well in other areas and is seen as an invasive species.

There is a little bit of a debate as to where the name of the plant came from. When botanist Thomas Nuttall established it, he said that it was in reference to Caspar Wistar. Wistar was a prominent doctor in 18th century Philadelphia, who is well known for his work in the University of Pennsylvania. When he was later questioned about the difference in spelling (why wisteria instead of wistaria), Nuttall said that it was just more phonetically pleasant that way. But the speculation is that he actually named the plant after his friend, Charles Wister, Sr., a man with no particular fame at all. Not much is known about this surname other than the fact that it's German in origin.

The plant has a large cultural significance in China and Japan and it appears in many stories and religious teachings. It is often used as a symbol for lost love or unrequited love. The Fuji Musume ("Wisteria Maiden") was a popular subject of folk paintings. It is believed to have been inspired by a dance. Fuji Musume paintings were given at weddings as a good luck token. It was even adapted into a kabuki drama. The title character becomes smitten with a young man and steps out of the painting to try to win his heart. Her attempts are futile, and she steps back into the world of the painting with a heavy heart.

In Feng Shui, wisteria represents honor and respect because the flowers appear to be bowing down. Shin Buddhism also sees the flower as a symbol of prayer and reverence. In the Victorian language of flowers, wisteria symbolizes clingy love or obsessive love. A wisteria plant can live up to 100 years, so it should be no surprise that it also symbolizes longevity. Some European families mark the passing years with the growth of the plant.

In many ways, wisteria is very similar to ivy. Both are very hardy vines that can survive in deplorable conditions. They can span out over acres of land and both are known for growing on the sides of houses. Both can grow out of control to the point of destruction, so they must be closely monitored.

Despite that, Wisteria is nowhere near as popular a name as Ivy. I think I see why: it kind of rhymes with hysteria. Personally, I don't see it as a problem, but that's up to the namer. I really wish more parents would consider Wisteria. It's sweet and...well, wistful. Plus, you just gotta love the nickname Wisty.