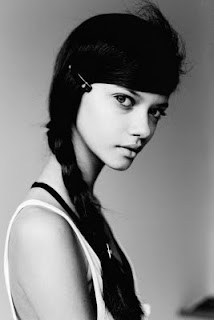 Ah, the mystery of Romilly. It seems to be a favorite of many name enthusiasts, including me. And we'll suggest it to people and they might say, "Oh, that's cool. What language is it from?" Uh...I don't know. "Um...okay. Where is it used the most?" Nowhere, really. "Then how did it get to be a baby name?" I have no idea. "They why are you even suggesting it?" Um..it sounds cool?

Here's what we do know. Romilly (pronounced "RAH-mi-lee") is the name of several small towns in north central France. Romilly is also a district in Barry, the town in Wales, and while there you apparently have to watch out for the local goblins. None of these places really seem to have much of a claim to fame.

It is also a surname used in France, but for some reason it has a lot of namesakes in England. The aristocratic Romillys, Esmond Romilly (who married one of the infamous Mitford sisters), and his brother Giles Romilly (a journalist imprisoned by the Nazis) all lived in England. In present times, Emma Thompson's daughter is named Gaia Romilly. For this reason, Romilly is familiar, if uncommon, in England.

There are a lot of possibilities for the etymology of Romilly. Some believe that it's derived from the Old English romen, meaning "to roam." Others believe that it has some reference to the city of Rome.

My theory (and I can't stress that enough) is that it's an old variation of Romulus. The similar pronunciations seem to support that, and some sources insist that it's traditionally a boy's name. But then why the concentration in north central France?

I'm not sure if this name will appeal to many Neo-Pagans. I would think that most of use would prefer names with a clear history or meaning. For magickal names, it's pretty much a requirement. If that's not a prerogative, Romilly is a unique option. I disagree with those that say the pronunciation is straight-forward, I keep wanting to say "rah-MIL-ee." Nevertheless, it's a great name for boys and girls. I'm guessing that all it will take is a new Glee character named Romilly to get the ball rolling in the United States.