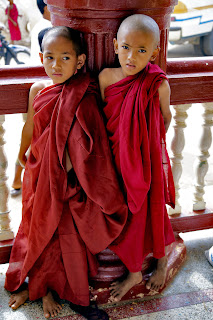 Anyone with a vague familiarity with meditation has heard the word Om. Most associate it with monks from the far east. Phonetically, the word is "aum" and it's chanted in a long, drawn out drone. It is sacred to Hindus, Buddhists, and Jainists because it represents a full range of sounds that can be made by the human voice.

The Sanskrit name for this syllable is pranava, which means "sound" or "to shout." And if you go to India or Nepal, you will see the symbol everywhere. Aum, Om, and Ohm are also used as place names and given names, but only for boys.

Although my first association with the name is meditation, it is by no means the only origin. Om and Ohm are also surnames from Middle German meaning "relative," and it was used as a respectful way to address elders. In Old Norse, it refers to farmsteads.

With some names, you can see a very specific type of family that would use them. Hamish is very English Aristocrat to me. Shaniqua is a stereotypical urban Black name. Assuming that little Om has no Indian ancestry, I picture his parents as crunchy granola, yoga obsessed, dreadlock wearing hippy-types. And hey, I'm not judging. I like yoga. I just don't know who else this name would appeal to. In America, anyway.

No matter why it appeals to you, Om is a spiritual name that everyone will be able to spell. I wish I could say the same thing about the pronunciation, but it's a small challenge. Although it's traditionally a boy's name in India, I see no reason that it can't be used for girls in the Western world. So there you go, my darling hippies. I am supportive of your alternate baby name choices!

As you can probably tell by now, I created the master list for boys names (the princes) and unisex names (the shape-shifters). I know that pretty much all names have the ability to become a shape-shifter, but you get the idea.

Hey, look at that! For Real Baby Names found a girl named Candle. Where have I read that name before?