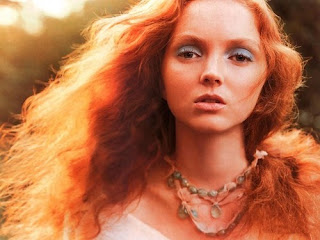 Happy Fathers Day, everybody! My father is half-Irish, half-Sicilian, his father is the Irish side, so I guess that means I must profile an Irish name.

Ah, my poor Dad and I. We clash so much on names. If I could describe his style it would be Traditional Irish Catholic. You know those names: Thomas, John, Kevin, Joseph, Kathleen, Mary Ellen, Josephine, all names of several people on that side of my family, because the Irish tradition is that everyone is named after everyone else. Anything not falling into that category and it's, "I see therapy in his/her future," from Father. Sorry, Dad. When the time comes, it's just not happening. But "real" Irish names, before-the-Christian Irish names, might be a possibility.

Clodagh (pronounced "KLO-dah") is a uniquely Irish name. It refers to the River Clodagh located in Tipperary, which is also sometimes known as River Clody. Unfortunately, not much is known about it's origins beyond that. We can suppose that it's the name of a goddess, because many Irish rivers are named after deities, but no one really seems to know.

Another theory is that it comes from the Latin name Clodna. Clodna is a variant of Claudia and means "lame." Would Roman influence have reached that far? It's probable: remember Maewyn. I checked to see if there was any relation to the famous Claddagh rings, but there doesn't appear to be any connection.

The Marquess of Waterford was the title of a noble British family that lived in Ireland. They propelled Clodagh into the name landscape when they used it for one of their daughters. It is extremely popular in that section of Ireland and virtually unheard of everywhere else.

Clodagh could work well in the States. It's not really frilly. It has a strong sound. It's pronunciation is a lot more intuitive than many Irish/Gaelic/Celtic names. And it'll be one of a kind. There's a whole lot of Marys but not a whole lot of Clodaghs. It's a great option for those that love Irish culture but not necessarily their naming tradition.