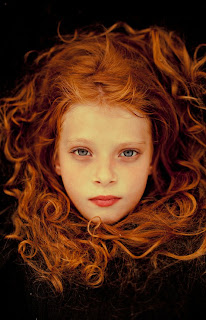 While Saint Patrick's Day holds no allure for me personally, it is a very important day for the Irish people. And what better day than this to profile this patriotic appellation. Thanks to Saoirse Rowe for requesting...well, Saoirse.

The pronunciation of Saoirse varies depending on the area, but none of them look anything like the way it's spelled. Many sources will list it as "SEER-sha," but others say it's "SAIR-sha," "SIR-sha," or "SHAHR-sha." Saoirse is an Irish Gaelic name that means "freedom" or "liberty." But just because it's Gaelic doesn't mean that it's based on something Celtic. This name doesn't have very much to do with Paganism at all. It's too new and too specific.

Saoirse first entered "naminess" in the 1920s, during the Irish War of Independence. Before that it was simply a vocabulary word, I think. If you met a child named Saoirse during that time you immediately knew which side of the war the parents were fighting on. Saoirse was exclusively the property of the Nationalists. Republic Sinn Fein is a radical political party that believes in a completely independent Ireland releases a publication called Saoirse. To this day, this name still has political overtones, although more so in Northern Ireland. But because Irish culture is more readily embraced by the government, children are less likely to be "marked" by this name.

A young well known namesake doesn't hurt either. Saoirse Ronan first acting gig was playing Briony in Atonement, which earned her an academy award nomination. She later starred in The Lovely Bones and Hanna, and is growing up to be quite a pretty young lady.

Use of this name is growing in the United States, but it has yet to reach the top 1,000. Technically, this name could be given to either a boy or a girl. However, the sheer number of girls given this name is a bit overwhelming, particularly in Ireland. I believe it currently ranks at #18 for girls in that country. There are no alternate spellings or variations.

Saoirse is lovely but very charged. I cannot picture a non-Irish person using this. It is, however, a very strong name, and a fitting name for children born on this day.