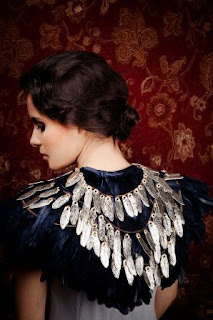 In retrospect I cheated a little bit on the last Witchitizer, because both Tabitha and Tatiana are reasonably popular. But Tabitha does have a heavy Witch association. Thanks to Moi for requesting this name.

Tabitha (pronounced "TAB-ih-thah") is an Aramaic name meaning "gazelle." Aramaic is a very old Middle Eastern language, and in Ancient Egyptian mythology the gazelle is the property of the god Seth. The name appears in the Bible on a woman who was raised from the dead by Saint Peter (this woman is also called by the Greek form of this name, Dorcas).

This name is particularly Witchy because, like Samantha, it's profile was raised by the television show Bewitched. Tabitha Stephens is Samantha's daughter, whom she gives birth to in the second season. At first, her name was spelled Tabatha in the production credits, but then it was changed to Tabitha during the fifth season. Tabitha and her brother Adam both have magical powers.

But Bewitched isn't the only show in which Tabitha appears. I don't know how many people are familiar with the soap opera Passions, it's still on television apparently. My mother was into the show a few years ago and I just thought that the fact that there was a witch in it was the strangest thing. In the show, Tabitha Lenox was older and had a talking doll named Timmy (or at least she did, I think the actor who played the role died), and it was just bizarre. But Tabitha talked about the other characters in Bewitched as if they were real people, so it's clear that Passions takes place in the same fictional universe.

Tabitha was on the charts during the 1880s, but it then re-emerged in the American top 1,000 in the 1960s. It peaked in the 1980s at #151. It has been steadily declining since then and is now ranked #643. In 2008 it ranked #423 in Scotland. Other spellings include Tabeitha, Tabetha, Tabbitha, Tabita, and Tabytha. There is also the very obvious nickname Tabby. Speaking of tabbies, another namesake is Tabitha Twitchit, mother of Tom Kitten in the Beatrix Potter books.

I don't know if the name's Witchy association has faded over time amongst muggles the same way that Samantha's has. I imagine so. But Tabitha has the same amount of grace as Samantha. I can very easily see it as a sibset. It's a great name for any witchlet.