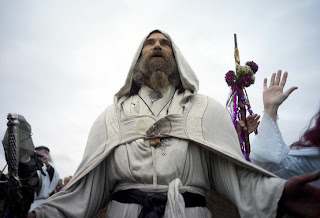 There was a time when parents were unafraid of the name Merlin. Could we start to see the most famous namesake as a positive again?

The wizard that we all know as Merlin (pronounced "MUR-lin") was originally Myrddin, a Welsh name meaning "sea fortress." It is derived from the Celtic elements mori, "sea," and dunom, "hill" or "fortress." Geoffrey of Monmouth, who translated this name into Latin, might have changed it to Merdinus if it weren't for one small problem: the French word merde. Since he did not want this character to be associated with feces, he decided to call him Merlinus instead.

The origins of Merlin are a little bit murky. Reading about it I got a little confused. This legendary figure may be partially based on Myrddin Wyllt, a bard, prophet, or madman depending on who you ask. Wyllt, in turn, might be based on the historical war leader Ambrosius Aurelianus, recorded in the Historia Brittonum. But Aurelianus lived long before King Arthur was supposedly alive. The story is that Myrddin Wyllt was a bard driven mad after witnessing the horrors of war, and then decides to live in the woods. When Geoffrey of Monmouth got his hands on these legends, he combined them and embellished them.

There are many different variations of Merlin's story, but here's the general idea. Merlin is the son of a Princess. The princess wasn't married and was living as a nun at the time, which lead to the belief that he was sired by an incubus, a type of sexual demon that takes advantage of women while they sleep. The rumor was that when Merlin was baptized, it erased the evil influence but left his supernatural powers intact. This was most likely a story meant to cover up the more obvious truth: Merlin's an illegitimate child. Despite what newer reinventions of Arthurian legends hint, the stories never specifically state that he's a Druid. But since he performs magick, it's implied.

Years later, the land was in turmoil due to Roman withdrawal and royal takeovers. King Vortigern fled his home and went to a fortress in Dinas Emrys. Unfortunately, the fortress was structurally unsound. The King's wizards told him that they had to sacrifice a fatherless child in order to solve this problem. Children like that are hard to find, but Merlin fit the bill quite nicely. But before the sacrifice could take place, Merlin found out through his visionary powers that the fortress kept collapsing because it was over a subterranean pool were two dragons were fighting. He also prophesied that Vortigern would be slain and Ambrosius Aurelianus would take the throne, followed by his brother Uther, followed by the greatest monarch of all, Arthur. This prophecy came true.

More years passed. After 460 nobles were murdered in a peace conference, King Ambrosius consulted Merlin about setting up a suitable memorial. With help from Uther, Merlin gathered large stones from the Chorea Gigantum, or Giant's Ring. He transported these heavy stones with his magickal powers, and re-erected them around the mass graves. This is the legendary explanation for Stonehenge. Arthur is the son of Uther and Ygerna (also known as Eigr or Igraine), the wife of Gorlois. Merlin transformed Uther into the image of Gorlois, which fooled Ygerna. After Arthur's birth, Merlin became the boy's mentor. When he became old enough, Merlin arranged a sword-in-the-stone contest which made Arthur the next king. And the rest, as they say, is history.

Merlin has remained a popular cultural figure and has appeared in many works of literature, film, and television. For example, he is in Mark Twain's A Connecticut Yankee in King Arthur's Court and T. H. White's The Once and Future King. The later was turned into the Disney film The Sword in the Stone. He is referenced in Harry Potter, as wizards and witches often use the explicative "Merlin's beard!" Merlin is now a television show, which depicts the title character as a young man.

A well known Neo-Pagan namesake passed away quite recently. Merlin Stone was a sculptor and art historian whose work was groundbreaking. She is most well known for the book When God Was a Woman, which paved the way for goddess religions. As far as I know, Merlin was her real name, I've seen nothing that suggests otherwise except that it seems a bit too Witchy to be possible.

There was actually a time when this name was quite popular. It first appeared on the charts in the 1890s. In the 1920s it peaked at #310. It didn't leave the charts until the 1970s. So maybe it's not the wizard associations that are a turn off for some people. It might just feel old. Variations include Marlin, Marlon, Merle, Merlyn, Merlynn, Merlen, and Merlinn.

Neo-Pagans feel a connection to Merlin, so it makes sense for them to use the name. But they haven't done so very often. Perhaps we should be the ones that bring Merlin back.