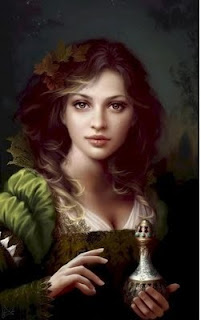 My new favorite webcomic is Gunnerkrigg Court, and I think all fellow Neo-Pagans should start reading it immediately. It takes place in a fantasy version of our world in which the sterile, futuristic city is in conflict with the magical forest filled with fairies and gods. The heroine of this story is a girl named Antimony Carver, who lives in a boarding school called Gunnerkrigg Court where she learns how to be a medium between the two worlds. I was immediately curious about the name Antimony because I've never heard of it before and yet it fits in with the style for girls' names today.

So I looked up the definition of Antimony, because I got the sense that it was some sort of science thing from reading the comic. Antimony (pronounced "an-TIH-moh-nee," I think) is derived from the Middle Latin antimonium. No one is quite sure what that word means or where it originally come from, but most believe it's oldest source is from the Ancient Egyptian stm, meaning "powdered antimony" because it was used to make eyeshadow. Some sources might list the meaning as French for "monk's bane" but this is folk etymology. So it's a brittle, crystalline, metallic element that is now used in alloys. Well, that's not much to go on in the naming world, even if it has a trendy sound.

But the comic also mentioned that antimony, and it's symbol, was important for alchemy. To Alchemists, the elements didn't just have physical properties that you could see, smell, and touch. They also had philosophical properties. Alchemy is pretty difficult to understand because a lot of surviving reference material is incredibly complex. Alchemists wanted to make sure that anyone wanting to learn their craft would stick with it, so the obscure language was a way of discouraging flaky people. But we do know the gist of what antimony meant to them.

Antimony represents the call of the wild, and the symbol is worn when someone wants to embrace their animal power. So Antimony Carver, who was born in a scientific community but has a natural affinity for conversing with the spirit world is named after a metal used to amplify the wild spirit. Simply brilliant. The Russian word for antimony is sur'ma. In Gunnerkrigg Court, Surma is the name of Antimony's deceased mother. The element was also often associated with wolves, which is significant because the forest spirit that is under Antimony's will takes the form of a wolf.

In a world full of little Averys, Kennedys, and Haileys, Antimony just seems logical. It's so logical that when I was first reading the comic it took me a while to realize that I had never heard it before. The only possible downside I can think of is that it could be confused with Timothy. On the other hand, it's a really creative way to get to the nickname Annie.

As far as I know, Antimony has yet to be added to the real-life naming world. Could Neo-Pagans be the ones to add it?