Name Round Up: The Names We Give Ourselves 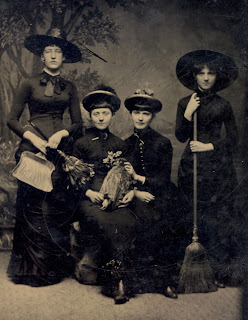 Some might think that trying to find a Pagan name for a child is silly, because what Pagan goes by her real name? I still want my children to have names that reflect my beliefs, but that is a good point. Many people in Neo-Pagan culture have two names, the one that they're born with and the one they earn as practitioners. It's interesting comparing this list with the names of Real Witchlets. Neo-Pagans are a lot braver when it comes to naming themselves. But not as brave as some people think.

I've seen a lot of opinion pieces about magickal names that profess the existence of people who choose Paganer-than-thou names. Ones that certainly would not fit on a name tag. Ones that include ancient unpronounceable names and invented nature smooshes and fancy titles. And all of them moan, "Why, why, why?"

I think the bigger question is, "Really, guys?" Have you really met someone who introduced himself as Grand High Priest Merlin Archemides Swanblood Hemlock of the Shadowed Plains? You didn't just hear about it from the cousin of a friend of your coven leader? Because I'm beginning to think that this is the Pagan version of the 'jello twins. It certainly doesn't happen with Witchlets, and I'm not even convinced that it happens with magickal names either. Most Neo-Pagan's I've met just say, "Hi, I'm Megan," or maybe, "Merry meet, I'm Elder Wolfheart!" or something. William Butler Yeats takes the cake for picking the most pretentious magickal name ever, but he's a rarity in my research. Most stick with two names, or a name and their title, or one name.

This is by no means a comprehensive list, but it a good sample of how Neo-Pagans want to be seen. First listed is the name that famous modern Pagans were born with, followed by the name they picked. Sometimes the magickal name is only intended for private circles, but others adopted it as their new identity.

Image Credit:
Found via http://pinterest.com
Posted by Isadora Vega at 9:07 AM