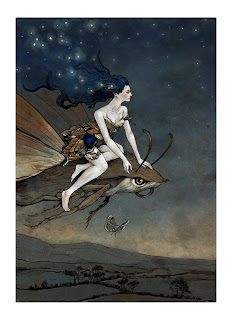 It's not exactly "faery" season, most people would profile those types of names in the springtime or during Midsummer. But do you really need a "season" for profiling Titania? And it's spring in the southern hemisphere.

Titania (pronounced "tiy-TAY-nee-ah") is a feminine form of Titanius supposedly invented by Shakespeare but it actually appeared before in Ovid's Metamorphosis. Titanius means "of the Titans," and Titania was a name often given to the daughters of Titans. The Titans were the powerful deities that ruled before the Olympians in Greek mythology.

When most people think of this name, they think of Shakespeare. In A Midsummer Night's Dream, Titania is the name of the queen of the fairies. The character is based off of the Faery Queen in traditional English mythology, who has no name. Titania is a strong and proud equal to her partner Oberon. She and her husband get into a fight regarding an Indian changeling and this quarrel propels the action of the play. Oberon wants to teach her a lesson. So he gets his servant, Puck, to cast a spell on her that causes her to fall in love with enchanted, donkey-headed Nick Bottom.

There is something decidedly Pagan about Oberon and Titania, aside from the fact that they're Fae. They might be husband and wife, but you don't really get the sense that they spend very much time together. In fact, it seems like they spend more time with overnight guests at separate dwellings. Oberon tricks Titania into bedding another man, but Titania doesn't seem too mad about it afterwards. Their relationship echos a lot of the relationships I see in the Neo-Pagan community in that it's sexually free and not monogamous. It's interesting if you consider the time period the play came out in.

Due to the play's influence, Titania is often used as a fairy name. She is referenced in Edmund Spencer's book Faerie Queene. She also makes an appearance in Alfred Lord Tennyson's drama The Foresters. Titania has a celestial association, it is the name of one of Uranus' moons.

Titania has never been a common name in the United States, which is a little bit surprising to me. I thought that it would be at least at the bottom somewhere. I wouldn't use this name for practical reasons. I constantly confuse this name with Tatiana (pronounced "tah-TEEAH-nah"). I always write one when I mean the other and read one as the other and I don't know why I just can't get it right. I still think it's a lovely name, but I couldn't use it.

Titania is one of those names that everyone is familiar with but no one is using. Perhaps Witchy people can lead the way.