Name Round Up: The Last Airbender and The Legend of Korra 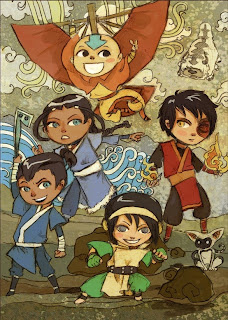 I am such a fan of Avatar: The Last Airbender and The Legend of Korra that I am convinced that I am annoying all of my followers on Pinterest with all the fan art I keep pinning. If you're not familiar with the shows, I highly recommend them. You don't need to be a kid in order to enjoy them.

There are also a lot of great names in the Avatar world. Some of them could be used for children, especially if you like Asian inspired names. So without further ado:

1. Tenzin. A Tibetan name heavily associated with the Dalai Lama. I can see this one catching on with Westerners.

2.  Katara. It's the name of a type of dagger, but it could also be translated as "droplet" in Arabic. The later is more fitting to the character.

3. Mako. A shortened form of the Japanese name Makoto, meaning "truth" or "faithfulness." Used for both genders.

5. Korra. Derived from Kore, a Greek name meaning "maiden." Some people might be more inclined to use the variant spelling of Cora.

6. Iroh. I actually wouldn't have put this one on the list, but apparently parents are already using it. As far as I know the creators invented it.

7. Rohan. A Sanskrit name meaning "to ascend." There is also a Tolkien connection.

8. Jet. Quite well used already, the character was named after another character from Cowboy Bebop.

10. Azula. Invented for the show, but there is a definite likeness to the Spanish word for "blue," and this mirrors the blue flames she makes. There is also an Azulon in the series.

11. Yue. Pronounced "YOO-eh" in the show, the name means "tragic accident" in Japanese and is traditionally given to infants who die shortly after birth. But it also means "moon" in Mandarin. Both apply to the character very well.

12. Momo. Yes, it is the name of an adorable pet lemur in the show, but Momo is a real name. It's Japanese for "peach." A bit too cute for me, but I can see some people liking it.

13. Haru. A Japanese boys name meaning "spring." The long form Haruki has the famous author attached to it.

One more, because I just can't resist...

14. Zuko. Okay, maybe not many parents would actually use this one. But it's possible, if people are using Iroh. He's my favorite character, so I had to squeeze him in. His name was invented for the show, but it does bear a resemblance to the Filipino word for "angry."

Any fans of the Avatar world reading this? Do you have any favorite names from the shows?